Beyond Likes: What I Love & Hate & Why You Care 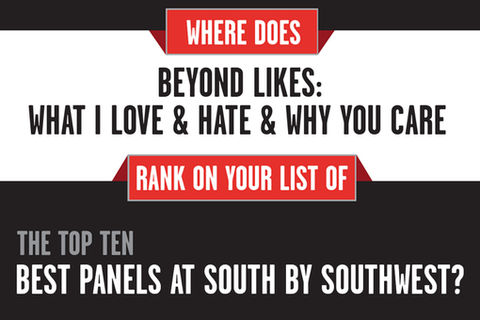 Every year, People selects its World’s Most Beautiful People, Time dubs its Person of the Year and Rolling Stone crowns its Albums of the Year. But, does having a small elite choose the best make sense when the barriers to declaring the vox populi’s personal preference have fallen so low?
Originally a means for keeping loose ties among people, social media has become a way for all of us to showcase our expertise. With everyone grabbing the open microphone of the Internet, society has more data points to develop a more accurate, representative and definitive list of preferences on any topic.
This presentation will explore how the ubiquity of cultural expertise impacts the culture, from what is created to how it is discussed and valued.

The track is sponsored by the Knight Foundation.

Anna Deveare Smith is two-time Tony nominated actress, playwright and professor. Perhaps most recognized for her role as Gloria Akalitus on Showtime’s hit series Nurse Jackie, her work in theatre has been a central part of her artistic life. Her transformational one-woman shows, including On the Road: A Search for American Character and Twilight: Los Angeles, have been celebrated for their blend of art and journalism. Smith is among the most respected voices in American art of the past 20 years. Her critically acclaimed work has examined how important issues, like health care and race riots, impact our culture. For her work, Smith was granted the prestigious MacArthur Award and has received an Obie, Drama Desk Award, Special Citation from the New York Drama Critics Circle and numerous other honors.