How Hyper-Developing Markets Are Kicking Our Ass 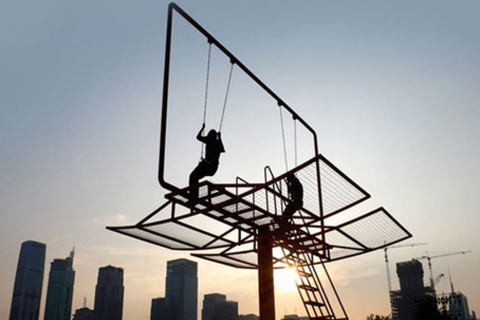 This isn’t a pessimistic rant about the lagging US economy, sad projections for domestic innovation, or lamentation of our declining cultural influence as a country. Instead, it is a celebration of all the cool, rad and groundbreaking work that is emanating from countries like Brazil, Russia, India, China, Malaysia, South Africa and other so-called developing nations.
Come find out how a vodka brand powered a bank, or how a billboard solved a local water crisis, and a soccer team saved thousands of lives.
Fast-paced and illustrated with case studies that have revolutionized marketing and advertising, Max's presentation is more cultural adventure than marketing speech.

A pioneer in the field of experiential marketing, Max Lenderman encourages businesses to look beyond traditional communication to get customers interacting with and living their brands.

He currently serves as founder and principal at School (www.schoolhelps.com), an agency that helps brands, businesses and organizations do better by doing good. School invents, designs and orchestrates strategy and creative work that focuses on human-engagement mediums that are most effective in sparking meaningful understanding, mass participation and culture change.

Lenderman’s past work experience includes Executive Creative Director at MDC Partners’ The Arsenal, TEAM Enterprises and Director of OuterActive at Crispin, Porter + Bogusky, where his efforts contributed to accolades from the 2011 Cannes Lions, the 2011 ONE Show and the 2011 ADDYs. He also served as Executive Creative Director at GMR Marketing, the largest experiential marketing company in North America, where his work led directly to industry recognitions like an Effie Award in 2009 and the 2007, 2008 and 2009 Ex Awards.

After returning from the US Peace Corps where he drilled wells in Chad, Lenderman began his career in New York City as a marketing journalist. In 1999, he founded and helmed Gearwerx, one of the first experiential-cum-digital marketing agencies in Canada with offices in Montreal and Toronto.

Lenderman’s breakthrough publication, Experience the Message: How Experiential Marketing is Changing the Brand World, was a Business Book of the Year Finalist in 2006 and has been cited as “the best book on experiential marketing.”

His second book, Brand New World: How Oligarchs, Paupers and Pirates Are Changing Business, was published by HarperCollins in April 2009. It has been translated into five languages.

Lenderman is a founding board member of the International Experiential Marketing Association (IXMA) and is a sought-after public speaker, media commentator and mentor on the subjects of strategic branding, experiential marketing and emerging global business trends.