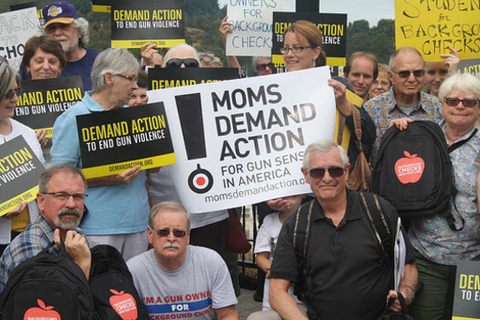 From a grocery store parking lot in Tucson, AZ to a movie theater in Aurora, Colorado. From a teenager named Trayvon Martin to the children of Sandy Hook Elementary. The narrative about gun violence in America has changed, and grassroots supporters are organizing online to save lives and keep guns out of the hands of dangerous people.
But how do you disrupt conventional wisdom and take on the best funded and most intimidating opponent in Washington -- the gun lobby?
Three groups have been leading this charge: Mayor Michael Bloomberg’s coalition of Mayors Against Illegal Guns, Gabby Giffords and Mark Kelly’s Americans for Responsible Solutions, and the concerned parents of Moms Demand Action for Gun Sense in America.
Hear their strategies for digital engagement and how they’re empowering ordinary people to help change state and federal laws and save lives.

Mark Glaze is the Executive Director of Mayors Against Illegal Guns (MAIG), a bipartisan coalition of more than 1000 mayors from across the country co-chaired by New York City Mayor Michael Bloomberg and Boston Mayor Thomas Menino. During his tenure, the coalition has nearly doubled in size, and its’ member mayors have been joined by 1.5 million grassroots supporters, making it the largest gun violence prevention group in the United States.

Prior to joining the coalition, Mark was a partner at The Raben Group, a Washington lobbying firm, where he led the strategic communications practice group. His clients included the Human Rights Campaign, Prudential Insurance and Amnesty International.

He has also served as director of the government ethics and public affairs programs at the Campaign Legal Center, a good government watchdog group.

Prior to entering the nonprofit world, Mark practiced law at Clifford Chance Rogers & Wells in the firm’s media law department. From 1993 to 1996, he worked as an aide to Rep. David Skaggs (D-CO).

Mark is an honors graduate of the George Washington University Law School and The Colorado College and a Truman Foundation Scholar.

Peter Ambler spent nearly eight years on the staffs of Members of Congress on Capitol Hill, serving as legislative director and deputy chief of staff to Congresswoman Gabrielle Giffords, among other positions. In 2012, he was appointed a special advisor with Energy Secretary Steven Chu, focusing on clean energy finance and deployment, and, in 2013, he joined Giffords and her husband Mark Kelly to launch Americans for Responsible Solutions, where he serves as founder and strategy director. Peter has also worked on several political campaigns and graduated from Georgetown University’s School of Foreign Service.

Shannon Watts is a 43-year-old mother of five children (two step-daughters, 23 and 19; two daughters, 18 and 17; and a 13-year-old son). For the past five years, Ms. Watts has been a stay-at-home mom in Zionsville, a suburb of Indianapolis, Indiana. Prior to that, she had a 15-year career as a communications executive for both public relations agencies and Fortune 500 corporations. Ms. Watts was not an activist or involved in gun issues prior to the shootings at Sandy Hook on Dec. 14, 2012. The day after the tragedy, she started a Facebook page called Moms Demand Action for Gun Sense in America. Since then, Moms Demand Action has become a nonprofit organization of 130,000 members and a chapter in every state. Ms. Watts’ goal is for Moms Demand Action to become the Mothers Against Drunk Driving of safe gun laws.

Stephen Geer is the Digital Strategy Director for Mayors Against Illegal Guns and the President of GEER, a digital strategy and communications firm based in Washington, DC.

Geer was Director of Email and Online Fundraising for President Obama’s historic 2008 campaign, building the largest email program in political history and raising more than $500 million online, and in the process, creating a platform for engagement that changed the course of digital organizing. Prior to founding GEER, Stephen led the digital strategy work at OMP, a DC-based direct marketing agency. His clients have included the ACLU, Al Gore, LIVESTRONG, Mayor Michael Bloomberg, the National Education Association, Governor Andrew Cuomo, the USO and Wikipedia.

In the past, Geer led online organizing at the Center for American Progress and served as digital communications director for the Children’s Defense Fund.