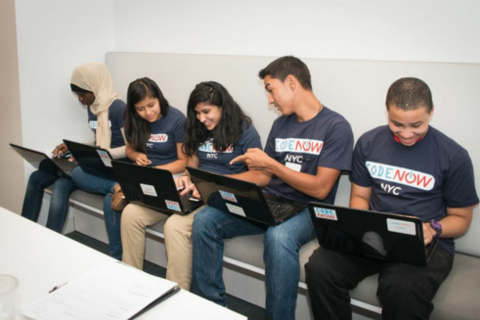 Every month, the tech industry adds about 9,600 jobs to the U.S. economy. By 2018, it will have added another 1.2 million new jobs, boasting an average salary of $78,000. But women make up just 22% of the computing workforce, and Latino and African-American workers each make up less than 5%.
Youth from under represented groups are in critical need of access to 21st Century skills for success. This panel features leaders of organizations working towards diversifying the technology workforce: Laura Weidman-Powers - Code2040, Kristen Titus - Girls Who Code and Ryan Seashore -CodeNow. Moderated by Jim Shelton, Acting Deputy Secretary at the U.S. Department of Education.

Baratunde is the co-founder of Cultivated Wit. He's also a comedian, author and former director of digital for The Onion. His responsibilities included producing the “War For The White House” 2008 election coverage, helping the company adapt its storytelling to new digital platforms such as smartphones and social media, and expanding The Onion’s public voice as well as relationships with the technology community. Baratunde is a best-selling New York Times author of How To Be Black. He regularly engages in “digital performance art” including being @The_Swine_Flu, running a real world campaign for his Foursquare mayorship and “live hate-tweeting” all Twilight movies. He’s been a standup comedian for more than 10 years and is a highly sought-after public speaker addressing topics related to the media, politics, technology and marketing. Also black people. He was named one of the 100 Most Creative People in Business by Fast Company magazine and has worked with the White House Office of Public Engagement as a digital advisor.

Laura is the co-founder and Executive Director of nonprofit CODE2040, which creates pathways to success in the innovation economy for Blacks and Latino/as. She brings to this work a background in entrepreneurship, nonprofit management, youth development, and technology. Laura has started two organizations in the education space, one nonprofit arts education organization in West Philadelphia that is currently celebrating its 10th year, and one for-profit tutoring company that gave rise to a book. Laura first explored the tech space as a project manager in a small web development shop in New York and, most recently before CODE2040, she served as VP of Product at a consumer web startup in Los Angeles, redesigning the product development process to be inclusive of engineers. Laura is a 2013 Echoing Green and Open Society Foundations Black Male Achievement Fellow and a 2013 Stanford Social Innovation Fellow. The Root named her one of the 100 Most Influential African-Americans in 2013 and Goldman Sachs named her one of the 100 Most Intriguing Entrepreneurs of 2013. Her work has been covered by The New York Times, Forbes, NBC, Bloomberg, Fast Company, NPR, and others. She has a BA cum laude from Harvard College and a JD and an MBA from Stanford University. Laura and CODE2040 are based in San Francisco

Mario Lugay is an Impact Advisor/Program Officer helping to build partnerships exploring the intersection of tech and social impact. Prior to his work at the Kapor Foundation, Mario served as the first Program Director of the Funders’ Committee for Civic Participation, where he provided leadership around new philanthropic investments in both integrated voter engagement strategies and for a fair and accurate 2010 census count. He has built significant experience in organizing as the National Coordinator of Racial Justice 911 and at CAAAV Organizing Asian Communities, and currently remains active at the intersection of community organizing and civic engagement as co-founder of the New American Leaders Project, the country's first organization dedicated to training first and second generation immigrants to run for elected office. Mario is a long-time philanthropic and nonprofit consultant, trainer, and speaker, and is a graduate of Columbia University. He is a life long NYer, has found a physical home in Oakland and a political home at Asian Pacific Environmental Network, where he serves as board chair.

I'm the founder of CodeNow, a non-profit focused on teaching underrepresented high school students foundational skills in computer programming through free extra curricular off campus trainings. This is essential because it lowers the barriers normally associated with programming by opening the door at an earlier stage when youths are just beginning to explore their options and opportunities.