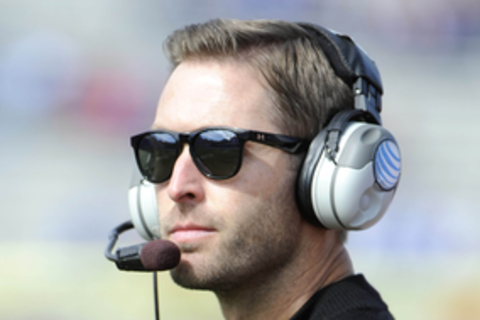 What does it take to compete at the highest levels of college football? What if your program is out-muscled financially and reputationally? What innovative schematic, cultural and organizational advantages could you create? And, finally, what if you were asked to do all this as a first-time head coach at age 34? This enlightening one-on-one interview will go deep with one of the brashest and boldest young leaders in sports about how to tackle these challenges. This session is part of the brand new SXsports programming at SXSW 2014.

George is a 20-year sports-journalism veteran, with experience as both a reporter and columnist. At USA TODAY Sports, he is a national college football writer, covering the scope of the sport across the country. Previously, he was the lead sports columnist at The Register-Guard in Eugene, Ore., and before that was the University of Oklahoma beat writer for The Oklahoman.

Kliff Kingsbury (@TTUKingsbury), Texas Tech's second all-time leading passer, returns to his alma mater and becomes the 15th head football coach in school history. At age 33, Kingsbury is the youngest head coach in a BCS conference and the second youngest in the FBS behind Toledo's Matt Campbell.

Kingsbury returns home after a one-year stint as offensive coordinator at Texas A&M where he played a huge role in leading freshman quarterback Johnny Manziel to the Heisman Trophy. Under his guidance, the Aggie offense finished third nationally in total offense by averaging 552.33 yards per-game. The Aggies ranked 14th nationally in passing offense and 13th nationally in rushing offense, making Texas A&M one of the most balanced attacks in college football. For the second consecutive year Kingsbury was named the national offensive coordinator of the year.

Kingsbury made the move to Texas A&M from the University of Houston where he played a key role in the Cougars' record-setting 13-win season in 2011. The Cougars finished 2011 with a 13-1 record and posted the program's highest final BCS finish in school history (No. 19).

Kingsbury served as co-offensive coordinator and quarterbacks coach for the Cougars, and was named the 2011 Offensive Coordinator of the Year by FootballScoop.com. The Cougars led the nation in total offense, passing offense and scoring in 2011, while record-setting quarterback Case Keenum placed seventh in the Heisman Trophy voting and won the Sammy Baugh Award.

With Kingsbury calling the offensive plays, the Cougars averaged 599.1 total yards per game, including 450.1 through the air, while scoring over 49 points per game. The Cougars scored over 70 points in two games in 2011, and finished the season with a 30-14 win over Penn State in the TicketCity Bowl.

Kingsbury was instrumental in the continued development of Keenum, who finished his illustrious career as the most prolific passer in NCAA FBS history. In his one season with Kingsbury as his QB coach, Keenum completed 428-of-604 passes for 5,631 yards and 48 touchdowns, all NCAA FBS bests.

In his first season as QB coach at Houston in 2010, Kingsbury prepped a true freshman signal caller, David Piland, to an average of 330.1 yards passing per game, which ranked No. 3 nationally. He was named to the Sporting News Freshman All-America team.

After an eight-year professional football career, Kingsbury entered the coaching ranks in the spring of 2008 when he joined Sumlin's staff as an offensive quality control assistant. A sixth-round draft pick in 2003 by the New England Patriots, Kingsbury played for five NFL teams and also saw action in the Canadian Football League and the All-American Football League.

Kingsbury was drafted by Bill Belichick and the New England Patriots after a record-setting career at Texas Tech. Kingsbury received multiple honors including Associated Press Big 12 Offensive Player of the Year as a quarterback for the Red Raiders. In addition, he set 39 school records, 16 Big 12 marks and 17 NCAA records during his career at Tech (1999-2002). As a senior he was awarded the Sammy Baugh Trophy, presented annually to the nation's best college quarterback.

The first in a long line of record-setting Texas Tech quarterbacks under then-head coach Mike Leach, Kingsbury recorded more than 12,000 passing yards and total offense including over 1,000 pass completions making him only the third player in NCAA history to accomplish all three. Kingsbury also excelled in the classroom as he was one of 14 collegiate football players to receive a post-graduate scholarship from the National Football Foundation and Hall of Fame as he also garnered Academic All-America Player of the Year honors in 2002.

A native of New Braunfels, Texas, Kingsbury graduated from Texas Tech in 2001 with a bachelor's degree in management.