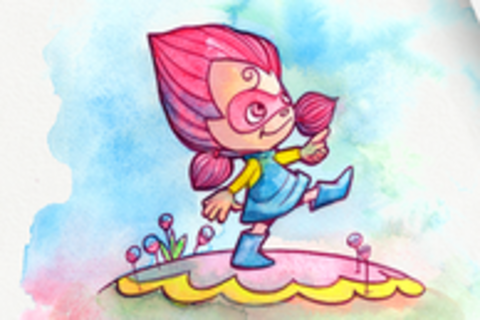 These interactive bilingual (ASL and English) storybook apps for iPad are unique and different from any other storybook apps currently available because they were designed and developed based on research in visual learning, visual phonology, bilingualism, and Deaf children's cognitive development by National Science Foundation’s Visual Language and Visual Learning Center at Gallaudet University.

With an interplay between a real life person using American Sign Language (ASL) and eye-catching animations, these apps showcase ASL storytelling at its best, with accompanying English story text for reading along, an interactive feature that brings children from printed English words to an ASL (including fingerspelling) and spoken English glossary, as well as vivid illustrations. Research foundations, design principles of these apps will be shared. These design and principles can apply to any visual learners. Be amazed, be awed, and be amused by these apps!

Melissa Malzkuhn leads and develops creative projects translating research findings into educational resources, as the Digital Innovation & Media Strategies Manager at the National Science Foundation’s Science of Learning Center on Visual Language and Visual Learning at Gallaudet University. Released in early 2013, The Baobab is the first of planned ASL/English bilingual storybook apps for young children. She also serves as a Co-Executive Editor of Deaf Studies Digital Journal, having previously being the Managing Editor, which oversaw the launch of the journal. With a passion for interactive and immersive storytelling, Melissa Malzkuhn leads Motion Lab, where creative literature meets digital technology. Melissa Malzkuhn is currently pursuing her MFA in Visual Narrative at the School of Visual Arts, in New York City.

Dr. Melissa Herzig is the Education and Research Translation Manager for VL2 at Gallaudet University. She is responsible for leading assessments and evaluations of resources within VL2 and for working with schools. Her role is to facilitate two-way communication between researchers and educators. She has BA in Biology from Gallaudet University. Her MA thesis in Bilingual (ASL/English) Education at University of California, San Diego (UCSD) was about bridging ASL and English skills through ASL/English Workshops. For that thesis, she developed an ASL Scale of Development authentic assessment tool for teachers. She earned her doctorate degree at UCSD focusing on the motivation of Deaf Latino adolescent struggling readers. She worked at Salk Institute, San Diego State University, and at UCSD as a Scholar Researcher. She was also a teacher at Chula Vista High School for 8 years. She worked as a supervisor for student teachers at UCSD and National University.