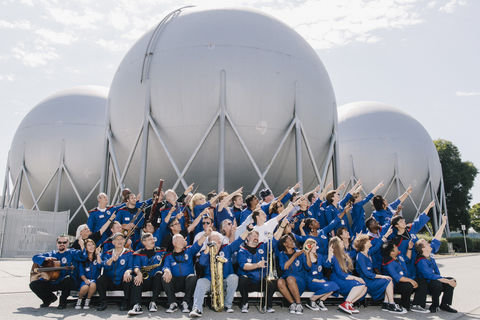 Together they performed Ground Control: An Opera in Space, a 27-minute long performance on Apollo 11's mission control.

On 4 August 2013, the ISO recordings were launched from Japan, broadcasting the ISO in space.

Nelly will explain her methods and results, and shows off some highlights from this cosmic-sized work.

Jasmina Tesanovic is Serbian/USA author activist filmmaker and artist. She lives between Torino, Austin and Belgrade and writes in three languages, italian english and serbian

Nelly Ben Hayoun has been called the “Willy Wonka of design and science” and she is on a mission to bring chaos, subversion and disorder into the design and the scientific world. An award-winning director and experience designer she works with leading scientists and engineers, to devise subversive events and experiences. Ben Hayoun previously collaborated with Beck, Bobby Womack, Damon Albarn, Maywa Denki, Bruce Sterling and Penguin Café in a musical collaboration that took music into space. Blasted from a Japanese launch pad in August 2013 and her most ambitious project to date; she assembled the International Space Orchestra (ISO) - the world first orchestra of space scientists from NASA Ames Research Center, Singularity University, International Space University and the SETI Institute. In 2013, Icon Magazine nominated Ben Hayoun as one of the 50 international designers “shaping the future”. In addition to being the Designer of Experiences at the SETI Institute in California and WeTransfer's first Head of Experiences; she is also a researcher in Human Geography at Royal Holloway, University of London, an academic at world leading institutions including the Architectural Association School of Architecture where she is a Visiting Professor. In her spare time, she is training to be an astronaut.