The Hacker & the Hustler: Coding a Great Company 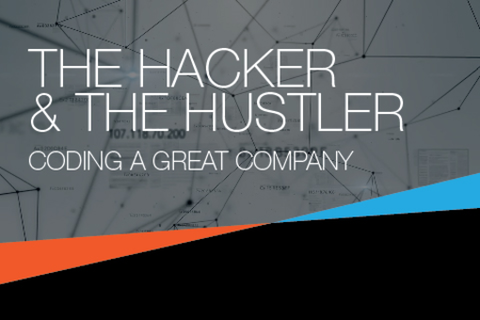 It all starts with the hacker. You’ve got the coding chops, passion, great hair, instinct, and an idea that’ll set the world on fire.
Pounding code from day to night, you bring your idea to reality and demonstrate its game-changing potential. But it takes more than code to scale a business.
Enter the hustler.
To build financial models and budgets. To court the angel investors and bring in the funding. To sell and market. You know, all the stuff the hacker is too busy coding to worry about.
Dries Buytaert, The Hacker, started a movement when he created the open source web content management system Drupal in his college dorm room 12 years ago. Today the Drupal community numbers a million, making it the most active open source project in the world.
Tom Erickson, The Hustler, helped take Acquia from startup to the fastest growing private software company in the U.S.
Together they’ll share insight into what it takes to go from great code to great company.

Dries Buytaert is the original creator and project lead for the Drupal open source web publishing platform, used by 2% of the world's websites. Buytaert serves as president of the Drupal Association, a non-profit organization formed to help Drupal flourish.

Buytaert is also co-founder and Chief Technology Officer of Acquia, a venture-backed software company that offers products and services for Drupal. In 2011, Forbes elected Acquia as one of the Top 100 Most Promising Companies. In 2012, Inc declared Acquia the fastest growing private software company in the United States.

A native of Belgium, Buytaert holds a PhD in computer science and engineering from Ghent University and a Licentiate Computer Science (MsC) from the University of Antwerp. In 2008, Buytaert was elected Young Entrepreneurs of Tech by BusinessWeek as well as MIT TR 35 Young Innovator. In 2012, Ernst & Young gave Buytaert the Entrepreneur Of The Year Award for New England. In 2013, Buytaert was elected a Young Global Leader for the World Economic Forum.

Tom is a founding director of Acquia, working with co-founders Dries Buytaert and Jay Batson to develop the company’s open source commercialization model and recruit the early team members. Tom joined Acquia as CEO in 2009, following the sale of Tele Atlas to TomTom, where he had been Chief Products Officer.

As he has done throughout a 30+ year-career in enterprise software, Tom is focused on driving customer success and business strategy at Acquia, Tom also leads the unique blending of open source, digital agency and enterprise software backgrounds, fostering a culture which he perpetuates through extensive travel to the 11 countries and 3 US offices from which Acquia currently operates.

At Acquia, Tom has guided the company to CAGR bookings growth of 1250%. In 2012, Acquia was named the fastest growing software company in the USA in the Inc 500 list of private companies and received the Massachusetts Technology Leadership Council Private Company of the Year award. Systinet’s revenue grew 5x in the 18 months Tom was at the helm prior to the sale of the company. Tom led webMethods’ international growth from 2000-2004 at a CAGR of 90% in what was arguably one of the toughest periods for enterprise software ever.

Tom began his career in technical roles after graduating from the University of Wisconsin – Madison with a BS Honors degree in electrical and computer engineering. He has spent 14 years of his career living in Australia, England and France. He continues to be passionate about travel, languages, photography, and food and wines. He knows many pilots on a first name basis.