The Real Reasons Why There Are Few Blacks in Tech 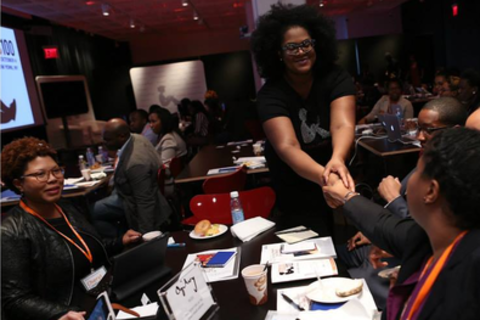 You can’t innovate without diversity. Period. Yet most of the proposed solutions to increasing diversity in tech involve people of color moving to Silicon Valley (leaving their social and supports networks) or exposing black youth to coding (who then go back to techless homes and schools). So, what’s the solution? In this thought provoking presentation, learn about the very real cultural, technological, and historical barriers to increasing the number of blacks in tech and how digitalundivided is directly addressing those barriers.

In 2003, when Yale grad Kathryn Finney founded one of the first fashion blogs, The Budget Fashionista, she had no idea that she was starting a movement. Kathryn grew the TBF brand to be one of the most popular and influential fashion blogs, reaching a global audience of more than 15 million+ unique visitors a year and became the first style blogger to receive a book deal from a major publisher, the first to be on network television (TODAY Show, Good Morning America, CNN), and the first to be profiled in the New York Times.

Kathryn currently serves as an advisor to several companies in the digital space, including the role of Editor-At-Large at BlogHer. She is considered an expert in building branded, women-centered online properties and is a frequent keynote speaker at conferences such as 92nd St Y, Decoded Fashion, South by Southwest (SXSW), New York Women in Communications, Women’s Funding Network, and numerous colleges and universities.

Kathryn has won numerous awards and honors including, AOL’s Top 10 Women in Money, Black Enterprise’s 40 Stars Under 40, and Silicon Alley 100.

In 2012, Kathryn Finney founded digitalundivided, a social enterprise that builds forward thinking initiatives that change the digital space. In less than six months, DID has had a signficant, quanitifiable impact on increasing the number of successful digital entrepreneurs of color. DID’s FOCUS100 event, held every October in New York City, reaches over 3 million people/47 million impressions and draws in major players in the digital space such as Newark Mayor Corey Booker, Andreesen Horowitz, Oglivy, and Techstars. DID’s GROW meetups, held in four cities (New York, Detroit, Chicago, and Bay Area), has created entry points into the digital space for new urban digital entrepreneurs. DID’s START symposiums in Altanta and Detroit, brings the “Valley to the Hood”, to teach urban entrepreneurs the tools to create and growth successful digital companies.