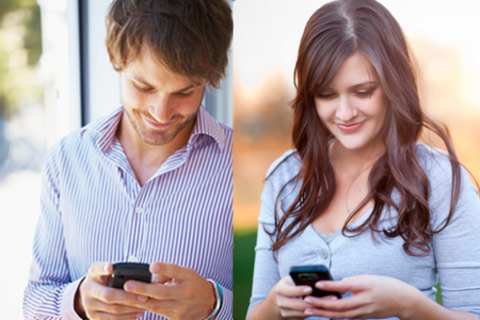 If your index finger hurts from swiping through online dating profile photos on your phone, you’re not alone. According to a recent study, half of all singles report using mobile online dating websites or applications. The study, jointly commissioned by ChristianMingle.com and JDate.com, reveals key findings about how mobile technology is redefining the rules for singles. For example:

*Nearly 2/3 of singles say mobile devices have completely changed the way they communicate with dates.
*82% of singles use text messaging as their default mode of communication.
*But, almost 70% of singles prefer talking vs. text when it comes to scheduling dates.

Greg Liberman, Chairman and CEO of Spark Networks, owner and operator of ChristianMingle.com and JDate.com, shares how daters dependent on their smartphones can put their best PHONE forward to meet that special someone.

Greg Liberman is the Chairman and Chief Executive Officer of Spark Networks, Inc. (NYSE MKT: LOV). Spark Networks' mission is to create iconic-niche-focused brands that build and strengthen the communities they serve. Anchoring Spark's portfolio of "relationship brands" are ChristianMingle.com, the leading community for Christian singles, and JDate.com, which is responsible for more Jewish marriages than all other online dating sites combined.

Since taking the reins as CEO in 2011, Liberman has been instrumental in driving historic growth for Spark Networks. It's fitting that Liberman leads a company of "relationship brands," given his management philosophy that relationships are what drive business results. Liberman's relational leadership approach has generated impressive results: growing the 16-year-old business by 27 percent (which doubled the company's market capitalization) in his first full year as CEO, creating a company culture in which the best and brightest want to work, and perhaps most importantly, producing countless "success stories" for the company's subscribers. Spark Networks' success under Liberman's direction has garnered him interviews with top media outlets including Bloomberg Television and Radio, BusinessWeek and Fortune, among others.

Liberman was appointed Spark's Chief Executive Officer in 2011, after having served as its President, Chief Operating Officer and, originally, as its General Counsel when he joined the company in 2004. Before formally entering the consumer internet and relationship-building world at Spark, Liberman served in a variety of legal and corporate development roles at publicly-traded telecommunications, internet infrastructure and biotechnology companies. He cut his teeth as an Associate in the Corporate & Securities Group at Orrick, Herrington & Sutcliffe LLP in San Francisco.

Liberman holds a BA, with Honors in Economics and University Distinction, from Stanford University and a JD, with Honors, from The Law School at the University of Chicago, where he also served as The Law School's Student Body President. In addition, he completed the Program for Management Development at Harvard Business School.

Liberman is also an active member of the Young Presidents Organization (YPO), Stanford Associates at Stanford University and a mentor at Los Angeles technology incubator Start Engine. In his role as Spark's CEO, he often speaks at top universities around the country, most recently at the University of Southern California and the University of Chicago, in addition to participating in industry-wide panels and conferences such as Variety's Faith and Family Summit and the Jewish Executive Leadership Conference.

When not leading the charge at Spark, Liberman can be found cheering on Stanford's sports teams and enjoying family time with his wife and two young children.