Building Your Own 21st Century Robot 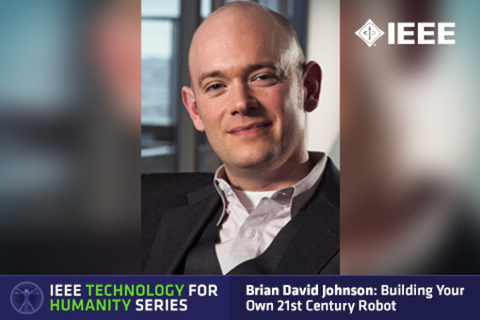 If you are fascinated by AI and robotics, and interested in how you can create and customize your own 3D printed plastic pal, then “21st Century Robot” by Brian David Johnson is for you. As an author and Intel futurist, Brian David Johnson leverages his knowledge and science fiction prototyping technique to share compelling stories about a new kind of robot and shows you how to build your own. You'll hear stories and gather innovative ideas to apply yourself. You’ll become familiar with the brains (programmable micro controller boards) that bring the robots in the book to life. You'll discover how servo motors combine with endoskeletons to form robotic “chassis” and how to customize and personalize your own design. Finally, “21st Century Robot” will help you print your own robot on a 3D printer and assemble it with a companion kit! Part of the IEEE Technology for Humanity Series.

The future is Brian David Johnson's business. As a futurist at Intel Corporation, his charter is to develop an actionable 10 -15 year vision for the future of technology. His work is called "futurecasting"—using ethnographic field studies, technology research, trend data, and even science fiction to provide Intel with a pragmatic vision of consumers and computing. Along with reinventing TV, Johnson has been pioneering development in artificial intelligence, robotics, and using science fiction as a design tool. He speaks and writes extensively about future technologies in articles (The Wall Street Journal, Slate, IEEE Computer) and both science fiction and fact books (Vintage Tomorrows, Science Fiction Prototyping: Designing the Future with Science Fiction, Screen Future: The Future of Entertainment Computing and the Devices we Love, and Fake Plastic Love). Johnson lectures around the world and teaches as a professor at The University of Washington and The California College of the Arts MBA program. He appears regularly on Bloomberg TV, PBS, FOX News, and the Discovery Channel and has been featured in Scientific American, The Technology Review, Forbes, INC, and Popular Science. He has directed two feature films and is an illustrator and commissioned painter.