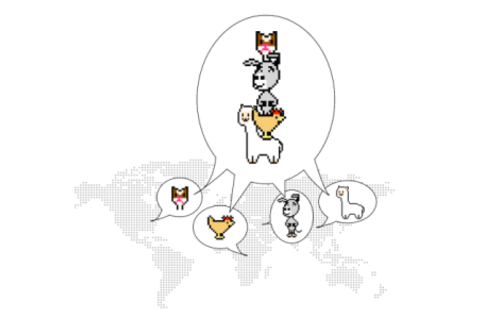 Global memes add snark and commentary to politics. Memes have helped citizens around the world express political support and dissent: from the meme that helped a cat run for office in Mexico, to the goats that parodied Obama’s visit to Uganda, to the Myanmar kitten that people used to protest the cost of cellphone service. And sometimes memes are used BY a government against dissent, as is the case in Azerbaijan.
Many memes stay within their culture, but advice animals, lolcats, and rage comics often get repurposed in surprising ways outside their origin.
What are the barriers for cross cultural memes to spread, and what is special about the ones that do? How are goat and cat memes an easier mechanism for people to begin to engage with international politics in an attempt to understand the LOLs?

Social computing researcher at Microsoft Research interested in collective action, civic media, and peer production. His research has been featured in the New York Times, CNN, and Wired. Andrés was named one of the 35 Innovators under 35 by the MIT Technology Review in Spanish, one of Boston's Business Journal 2013 Emerging Leaders, and one CNET's "most influential Latinos" in the US. He holds a PhD from the MIT Media Lab, and a BS from the Tec de Monterrey in Mexico.

I'm a Strategist and Contributing Author for the Civic Beat as well as a freelance writer, curator, and creator based in Oakland. I recently co-curated the world’s first Tumblr Art Symposium, which included commissioned essays, panelists, an exhibition on the visual networked culture forming all over the world, especially on Tumblr. Curated “Global Space," a groundbreaking exhibition for the Indianapolis Museum of Contemporary Art on the changing face of the individual in a globalized and networked world. I also My writing has appeared on Salon, Hyperallergic, Medium, and more. I am currently preparing for a residency at the Internet Archive in San Francisco and working on building a Spanish and English Twitter translation platform called SeaThree.

Elena Agapie is a researcher in Human Computer Interaction. Elena received a Masters in Computer Science from Harvard University in 2013. She researches how we can enhance user interfaces to encourage better user behavior. Elena is particularly interested in how technology can help people overcome their biases and engage with more diverse information. Elena has been researching how people interact with opinions online, in news and through memes. Her work has been done in collaboration with the MIT Center for Civic Media and the Berkman Center for Internet and Society. More recently Elena has done work in information retrieval and visualization at JPL/NASA and Fuji Xerox Palo Alto Research Lab. In 2011 Elena worked in Jerusalem supporting collaboration between Israeli and Palestinian high school students

Katy E. Pearce is an assistant professor in the Department of Communication at the University of Washington. She researches social and political uses of technologies and digital content in non-democratic contexts, specifically in the semi- and fully-authoritarian states of former Soviet Union. Her current research areas include digital divides and inequalities; the affordances of information and communication technologies for social and opposition movements; and online impression management. Pearce also holds an affiliation with the Ellison Center for Russian East European, and Central Asian Studies.