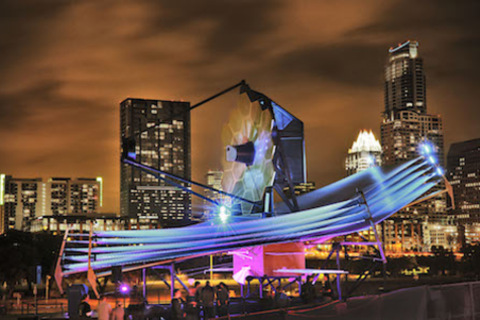 The James Webb Space Telescope is the world’s most ambitious scientific experiment. It is the successor to the iconic Hubble Space Telescope, and will be 100x more powerful. The Webb Telescope, taller than a four-story building, is designed to answer some of the most puzzling scientific questions that humankind faces today. "How did the Universe form?", "Is our Solar System unique?", and "Are we alone?" Webb will answer these questions, and many more, by taking the deepest and clearest pictures of the cosmos to date. But JWST is not alone. JWST discoveries will rely on the findings of precursor telescopes like Kepler, which has already discovered dozens of Earth-size planets, or the upcoming WFIRST and TESS missions. Our panel will examine the important contributions these telescopes will make in the search for life in the Universe, and set the stage for how JWST could find the first signs of life on another planet.

Dr. Alberto Conti is the Innovation manager for Civil Air and Space in the Business and Advanced Systems Development organization at Northrop Grumman Aerospace Systems.

In this role, Conti is responsible for sector campaigns to address business priorities for civilian government agencies and commercial customers. He develops relationships required within the customer community to achieve campaign objectives, and drives the campaign toward meeting customer, mission and business objectives. He is responsible for innovation, scientific and technical advocacy for astronomy, astrophysics, earth science and related fields, develops campaign strategy and provides Business Development leadership to captures and ongoing business.

Conti is well known for his work on Galaxy Formation and numerous pieces of work on sky survey data, and has been a leader in developing data mining tools to deliver optical and UV data to the astronomical community as part of the NASA Mikulski Archive for Space Telescopes. Conti was an early proponent of the use of modern data mining and visualization techniques across the astronomical community. Many will recognize him as the co-creator of the GoogleSky concept and a team member of Microsoft's Worldwide Telescope.

Amber grew up in the small farming town of Bee Branch, Arkansas where her fascination with astronomy began under beautifully dark, rural skies. She obtained her B.S. in Physics at the University of Arkansas in Fayetteville in 2002, and completed her M.S. and Ph.D. in Physics at Arizona State University in 2008. Amber has been involved in NASA programs since her undergrad years, beginning with flying an experiment on NASA’s microgravity KC-135 plane (the “vomit comet”) in 2001.

Amber’s research focuses on interacting and star-forming galaxies in the context of galaxy assembly, where she uses imaging and infrared spectroscopic data mostly from the Hubble Space Telescope. Her broad research interests include galaxy formation and evolution, galaxy mergers and interactions, physical processes induced by galaxy interactions including star formation and black hole growth, and emission-line galaxies.

In addition to research, Amber’s role with the James Webb Space Telescope project science team involves working with Science Communications. She has spoken at numerous schools, astronomy clubs, museums, and research societies locally in the DC area and nationwide. Amber is also interacts frequently with the media, having done numerous live television interviews, media features for NASA, and has appeared on the History Channel, Spike TV, and in the Late Night with Jimmy Fallon's "Hubble Gotchu" segment.

Amber lives in Glenn Dale, MD., with her husband Matt and her two Great Danes and cat. Her love of all things air and space prompted her to become a pilot; she earned her Private Pilot's license in early 2013. She has been an active yoga practitioner for years, and teaches a volunteer yoga class weekly. Amber is very involved in community and volunteer work, and loves to cook.

Blake Bullock is the James Webb Space Telescope Campaign Lead for Northrop Grumman Aerospace Systems in Redondo Beach, CA. In this role, she is responsible for supporting scientific and technical advocacy for astronomy and astrophysics. Prior to her current assignment, Ms. Bullock served as Risk Manager and Systems Engineer for the James Webb Space Telescope Program at Northrop Grumman Aerospace Systems.
Ms. Bullock served as a Presidential Management Fellow at the National Aeronautics and Space Administration (NASA) and in the Pentagon for the Office of the Secretary of Defense, Strategic and Space Programs. Prior to this, she lived and worked in New Mexico as a science journalist and Mass Media Fellow of the American Association for the Advancement of Science. She holds a Master’s degree in Astronomy from Wesleyan University and a Bachelor’s degree in Astrophysics from the University of California, Berkeley. She is a member of Women in Aerospace, the Association for Women in Science, and the American Astronomical Society.
Northrop Grumman Corporation is a leading global security company providing innovative systems, products and solutions in aerospace, electronics, information systems, and technical services to government and commercial customers worldwide.

Dr. Natalie Batalha is a research astronomer in the Space Sciences Division of NASA Ames Research Center and the Kepler Mission Scientist. Dr. Batalha started her career as a stellar spectroscopist studying young, sun-like stars. She holds a bachelor degree in physics from the University of California, Berkeley, a doctorate in astrophysics from UC Santa Cruz, and completed a post-doctoral fellowship in Rio de Janeiro, Brazil. Inspired by the growing number of exoplanet discoveries she joined the team led by William Borucki at NASA's Ames Research Center, Moffett Field, Calif., working on transit photometry -- an emerging technology for finding exoplanets.

Dr. Batalha has been involved with the Kepler Mission since the proposal stage, and as one of the original Co-Investigators was responsible for the selection of the more than 150,000 stars the spacecraft monitors. She works closely with team members at Ames to identify viable planet candidates from Kepler photometry. She led the analysis that yielded the discovery in 2011 of Kepler-10b — the first confirmed rocky planet outside our solar system.

Her contributions to the Kepler team efforts are central to the Kepler discoveries that humans, prior, have left to the imagination and the realms of science fiction.