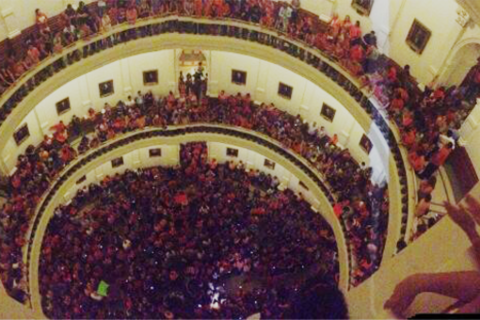 When the Texas Legislature took up abortion legislation, planned and spontaneous social media filled the Capitol with thousands of activists and delivered a global participatory audience. Celebrities tweeted as an 11-hour filibuster approached a midnight deadline, joined by fake Twitter accounts, YouTube, viral memes, livestreaming, guerrilla wifi hotspots, Taiwan animation, secret Facebook groups, Google+ Hangouts, new songs, merchandise, competing Wikipedia edits, dueling commentators, inappropriate touching, women in chains, alleged terrorist sightings, tampon confiscation, Hail Satan chanting, attempted use of a smartphone as an official timepiece, humorous Amazon product reviews for the filibuster shoes, conflicting timestamps, suffragettes, pizza, and vomit. The Internet had it all (http://www.esquire.com/blogs/politics/wendy-davis-filibuster-by-the-numbers-062613). Did it make a difference? Hear battle-tested techniques you can use from those in opposing trenches and in between.

Eliza Vielma is the de facto sorority sister of the political social media realm in Texas and beyond. The early adopter’s early adopter, she identified the power of emerging social media technology to connect the like-minded and build effective coalitions. With her bright personality, quick wit and eye for emerging trends, she has established herself as a respected influencer on conservative issues.

During her six years as the Director of New Media and Legislative Affairs for Americans for Prosperity – Texas, she established the organization as a leading voice in the discourse that shaped policy and influenced elections. Influence Opinion named her an influencer for the last two Texas Legislative Sessions, citing the reach of her efforts and the depth of the ensuing conversations.

Generous by nature, she has happily shared her social media wisdom with conservative communicators at every skill level as one of the original founders AFP Foundation’s first RightOnline Conference, which welcomed more than 600 activists and bloggers to Austin, Texas. It was the first-ever conservative event created to counter the leftwing Netroots Nation Convention, an annual gathering of what the media called the most concentrated gathering of high-profile progressive bloggers to date.

Erica Grieder is a senior editor at Texas Monthly and the author of Big, Hot, Cheap, and Right. Prior to that she was the southwest correspondent for The Economist, based in Austin. She is from San Antonio.

Joe is currently Communications Director for the Travis County Democratic Party and a Senior Writer at the Burnt Orange Report. He has worked in politics for over 10 year with representatives of Congress, the Texas legislature, Jefferson Co. and the City of Austin. His focus on social media has earned him several panel appearances regarding its use in politics.

He is a guitarist, pet advocate, and loves to play outside.

As a Texas Senate staffer, Steven led a technology initiative that saved thousands of taxpayer dollars, concept-proved an instant feedback loop for public hearings, debuted the use of live geospatial data in a legislative hearing, and produced the first mobile app of any state legislative committee in the country.