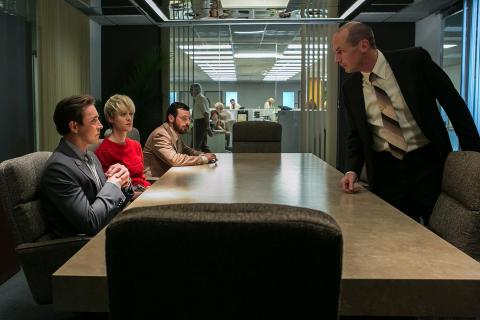 From AMC Studios, "Halt and Catch Fire" captures the rise of the PC era in the early 1980s, during which an unlikely trio – a visionary, an engineer and a prodigy – take personal and professional risks in the race to build a computer that will change the world as they know it. While charting the changing culture of Texas' Silicon Prairie, tensions build within the group as they attempt to navigate the thin line between visionary and fraud, genius and delusion, and as their drive to do something that matters runs up against their ability to truly innovate. The 10-episode series is created by Christopher Cantwell and Christopher C. Rogers and executive produced by showrunner Jonathan Lisco ("Southland") and Gran Via Productions’s Mark Johnson (“Breaking Bad”, “Rectify”, "Diner", "Rain Man") and Melissa Bernstein (“Breaking Bad”, “Rectify”). Filmed on location in Atlanta, the series stars Lee Pace ("Lincoln", “Pushing Daisies”) as Joe McMillan, Scoot McNairy ("Argo") as Gordon Clark, Mackenzie Davis ("Smashed") as Cameron Howe, Kerry Bishé ("Argo", "Red State") as Donna Clark, Toby Huss ("Cowboys & Aliens") as John Bosworth and David Wilson Barnes ("The Bourne Legacy", "You Don’t Know Jack") as Dave Butler.

Juan José Campanella is an Argentine director, writer and producer. His film credits include The Boy Who Cried Bitch; Love Walked In; El Hijo de la Novia; and the Oscar-winning El secreto de sus ojos, among others. In television, Campanella has directed on such series as House and 30 Rock. He holds a Master in Fine Arts from New York University.