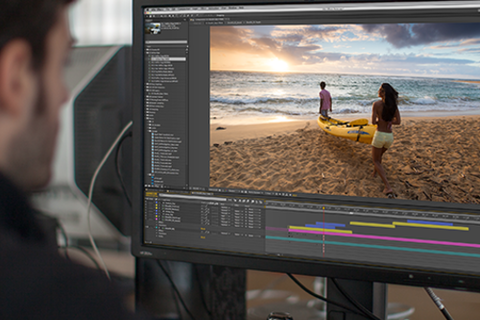 In this session, Adobe Worldwide Evangelist Jason Levine will cover a video workflow from capture and logging, to building rough cuts and grading your footage through delivering your content anywhere, including Behance, now part of Adobe. This session will feature Adobe Creative Cloud, including Prelude CC, Adobe Premiere Pro CC, Adobe SpeedGrade CC and Adobe Media Encoder CC. See how Adobe Creative Cloud tools can work in your workflow.

Jason Levine, Principal Worldwide Evangelist for Adobe, travels the globe educating users and promoting the Adobe Creative Cloud, with a focus on video products like Premiere Pro, After Effects, Audition, Photoshop and SpeedGrade. Levine has conducted training/workflow sessions for some of the top broadcast corporations in Europe and Asia including BBC, RTL and SVT. Prior to Adobe, Jason was a full-time recording engineer working in studios coast-to-coast, engineering hundreds of recordings in a multitude of genres, prompting the formation of BoodahJooMusic Publishing. Levine also has a children’s television music program in development entitled Just Play Music™, whose goal is to educate and inspire kids and adults alike to simply enjoy and the embrace the incredible feelings of playing live music. Since 2003, Jason has presented to more than 250,000 people, from Syracuse to Singapore and everywhere in between.