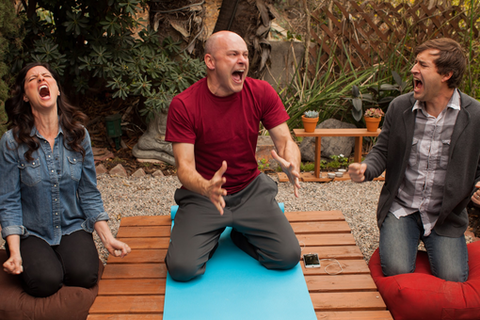 A Duplass Brothers Production in Association with Principato-Young Entertainment

Prior to PYE, Corey was an EP at Yahoo and created some of the most-viewed series on the web, including Primetime in No Time and Daytime in No Time. He also co-directed the feature documentary Dear Jack.

Jennifer Lafleur was one of the leads of The Duplass Brother's DO-DECA-PENTATHLON, and appeared in their films BAGHEAD and JEFF WHO LIVES AT HOME. She can also be seen in THE PRETTY ONE, MUTUAL FRIENDS, the upcoming Comedy Central show REVIEW, and Adult Swim's NEWSREADERS and YOU'RE WHOLE. She recently wrapped production on the independent films THE MIDNIGHT SWIM and THE MIDDLE DISTANCE.

The two brothers later wrote, directed, and produced the films Baghead (2008) and Cyrus (2010) together[10] and have a unique style which consists of a great deal of ad-libbing off of the original script, shooting a number of takes, and editing scenes down 15 to 20 times.[11] Their films Jeff, Who Lives at Home and The Do-Deca-Pentathlon were released in 2012.[12][13] He stars in the FX comedy television series The League, with his wife, Katie Aselton

Rob Corddry made his debut on “The Daily Show with Jon Stewart” in the spring of 2002 and quickly became one of the most popular correspondents to emerge from the groundbreaking talk show. He continued to “educate” audiences with his snarky political sketches through the fall of 2006, and has reprised his role in guest appearances scattered through the years since.

Continuing also to write and create his own comedic content, Corddry launched CHILDRENS HOSPITAL for Adult Swim which is currently in its fifth season. CH has won the Emmy in the last two-years for "Outstanding Special Class: Short-format Live-Action Entertainment Programs". Also for Adult Swim, Rob has created the show NEWSREADERS which is heading into its second season.
Rob’s feature credits include OLD SCHOOL, BLADES OF GLORY, SEMI-PRO, HAROLD & KUMAR: ESCAPE FROM GUANTANAMO BAY, HOT TUB TIME MACHINE, BUTTER and SEEKING A FRIEND FOR THE END OF THE WORLD. In 2013 Rob can be seen in PAIN & GAIN, WARM BODIES, IN A WORLD

Ross Partridge was Co-Producer of the Duplass Brother's Do-Deca-Pentathlon (SXSW 2013). He directed the feature film Interstate 84 starring Kevin Dillon (Toronto Film Festival 2001), and produced the HBO documentary Uncle Frank and the 9/11 PBS documentary America Rebuilds. Also an actor, he starred in The Off Hours (Sundance 2011) directed by Megan Griffiths, The Freebie (Sundance 2010) directed by Katie Aselton, Baghead (SXSW and Sundance 2008) directed by the Duplass Brothers, the ABC pilot Doubt opposite Steve Coogan, Cold Turkey with Peter Bagdonovich and Cheryl Hines, and HBO's How To Make It In America, among others.