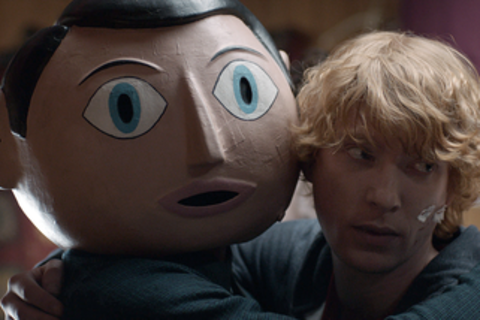 Jon has a problem. He was born in the wrong place to become a rock n roll hero. Living in a seaside town where people go to retire, his only connection with the 'real' world is Twitter.

FRANK has been described as "The first film to really get Twitter" shaping its narrative via the voiceover of Jon's tweets. But the story doesn't start when the film does. Follow Jon & rewind back to late 2013 & you can immerse yourself in the life of @jonburroughs83. It's a Twitter prequel telling how Jon ended up on the beach in the opening scene.

Jon's social media presence is not just a backstory, it’s a repository for the writer & director's research that went into the film. It's a social media version of Kubrick's Boxes using ThisIsMyJam & Spotify to curate the music that inspired the film.

Anna is Head of Digital for Film4 leading on groundbreaking storytelling innovation across development, production and distribution.

Projects to date include Ben Wheatley's film A FIELD IN ENGLAND, Ken Loach's THE SPIRIT OF '45, Shynola's DR. EASY, Lenny Abrahamson's FRANK and 20,000 DAYS ON EARTH from Iain Forsyth and Jane Pollard featuring Nick Cave. Currently in production are Peter Strickland's THE DUKE OF BURGUNDY and Louise Osmond's DARK HORSE.

She takes to Film4 an extensive track record of multi-award-winning independent film and television production with Quark Films, as well as experience across sales and distribution, working on BAFTA-winning digital entertainment media, and in consulting on digital strategy and audience engagement for major global brands. Anna was recently named as one of Time Out's 'Culture 100', described as "the innovators, visionaries and pioneers behind what’s now and what’s next" alongside Danny Boyle, Barbara Broccoli and Steve McQueen.

Hugh Spent 15 years at the BBC developing digital experiences for young audiences. After leaving in 2011 Hugh set up Cow Wow Wow to work with media companies on idea generation running regular courses on 'Where Ideas Come From'. Hugh also works closely with Storythings who help organisations such as Google and BBC tell stories and make digital things.