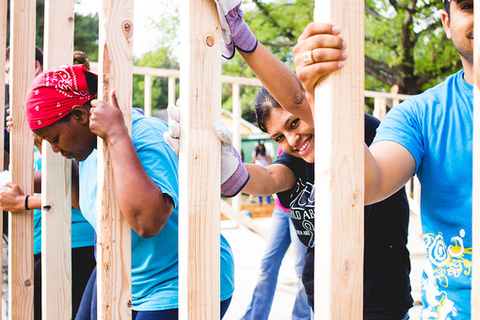 Media has been disrupted. Now what? We all know (and have heard a thousand times) that new tools for creation, funding, and distribution have empowered content creators like never before. But the truth is that with these new opportunities, come new challenges. Content creators can no longer be just artists, they must also become entrepreneurs - masters of marketing, branding and monetization. They must find ways to get noticed among the masses. Similarly, media companies are struggling to stay relevant in a world where content is abundant and free.

The solution is brewing in the DIY community. Filmmakers are finding new ways to build audiences and keep them for future projects. Creative professionals are working together to create a new ecosystem built on collaboration.

Brian Udovich is an award winning feature film producer residing in Los Angeles, California. His credits include ALL THE BOYS LOVE MANDY LANE (Amber Heard, Anson Mount - debuted at the 2006 Toronto International Film Festival where it was sold to The Weinstein Company), THE WACKNESS (Ben Kingsley, Josh Peck, Olivia Thirlby - debuted at the 2008 Sundance Film Festival and was the winner of the festival’s Audience Award), A NECESSARY DEATH (winner of the 2009 AFI FEST Audience Award for best dramatic feature film) and WE GOTTA GET OUT OF THIS PLACE (Mark Pellegrino, Mackenzie Davis – debuted at 2013 Toronto International Film Festival and Winner of the Audience Award at AFI Fest 2013.)

Mr. Udovich is a native of Joliet, Illinois. He has his Masters degree in Producing from the American Film Institute (AFI), and has his bachelor’s degree from Illinois Wesleyan University. His AFI thesis THE MONSTER AND THE PEANUT was the recipient of a grant from the Alfred P. Sloan foundation and won the first prize “Emmy” for best dramatic student film in 2004 from the Academy of Television Arts and Sciences. In 2007 he was awarded the Robert M. Montgomery Outstanding Young Alumnus Award from Illinois Wesleyan University. In both 2011 and 2012 he served as the committee chair for the selection of the prestigious Piaget Producers Grant for the Independent Spirit Awards. From 1998-2001 Mr. Udovich traveled the world working as a senior business consultant for the French firm Cap Gemini. He is a co-founder of a film development and production company ROUGH & TUMBLE FILMS and co-founder and programmer of the weekly genre screening series REEL GRIT SUNDAYS.

Jen Yamato is a reporter for Deadline Hollywood. Prior to joining Deadline she was Executive Editor at Movieline and Senior Editor at Rotten Tomatoes. She has also served as Film Critic for Movies.com and contributed to numerous online film publications including Film.com and AOL Cinematical. Jen lives in Los Angeles.

Entrepreneur and story-teller at the intersection of Hollywood and Silicon Valley. Founder of NeighborGoods.net, formerly at Participant Media and Revver.com.

Monty Miranda is a director, writer and producer. He was born at Hahn Air Base, Germany. He began his post high school studies at the Air Force Academy and after six challenging months and one easy decision; he resigned and enrolled in the University of Colorado to study filmmaking and journalism.

Mr. Miranda's first experience as a Director was with the unauthorized use of the family Super 8 mm movie camera at age eight; which ignited his passion for filmmaking. Upon graduating Miranda founded the production company, Incite Films. Through that Denver based company Miranda directed hundreds of national television commercials for a variety of clients ranging from McDonalds to TIVO. In addition to commercials Incite Films created the first national video game television se-ries, Twitch which ran for two seasons and Mr. Miranda directed.

Mr. Miranda’s work is known for its diverse use of music and keen sense of comedy. Monty has worked with such artists as Palma Violets, John Meyer, Steve Jordan, New Order, Matthew Sweet and Devotchka, actors and pro athletes from Spike Lee and Daryl Hannah to Tony Hawk. The Cannes LIONS, the CLIO’s, the Effies, the Addy’s, the BDA’s, have honored Monty Miranda’s work. His award winning political spots have been featured in the national press. CNN, the LA Times and the Washington Post praised the ads for their innovative approach and contribution to a landslide upset victory by political neophyte (GOV) John Hickenlooper, helping him win, office by the largest margin in history.

FEATURE FILMS AMERICAN MUSTANG (3D)
THE INSOMNIAC
SKILLS LIKE THIS

Patty West hails from the Chicago area and holds a B.S. from Northwestern University and a M.F.A. in Producing from the AFI Conservatory. As a producer, her short films have premiered at AFI FEST, been a New York Times Critic's Pick, screened at OutFest and aired on the Showtime Networks. Patty began in LA working in freelance production and then went on to work for producer Carol Baum (FATHER OF THE BRIDE, THE GOOD GIRL) as a Creative Executive. She went on to work for the AFI Conservatory where she programmed the Harold Lloyd Master Seminars and brought such guests as Luc Besson, David Cronenberg, Sam Mendes and Rian Johnson to the AFI campus.

Her first narrative feature film, SOME GIRL(S), premiered at SXSW in 2013. The film is written by Neil LaBute, based on his play, directed by Daisy von Scherler Mayer and starring Adam Brody, Kristen Bell, Zoe Kazan, Mia Maestro, Jennifer Morrison and Emily Watson. SOME GIRL(S) was the first exclusive day-and-date premiere for a narrative film on Vimeo On Demand. The business model was featured on CNBC and in the Wall Street Journal, TIME, International Business Times, HDVideoPro and more.

Patty has taught producing workshops to undergraduate and graduate students at the University of New Orleans. She helped found the AFI Alumni Mentor Program and serves as Co-Chair.

Currently, Patty is the Director of the AFI Directing Workshop for Women (DWW), helping train and create opportunities for female directors in film and television.