How To Book Your Next Audition 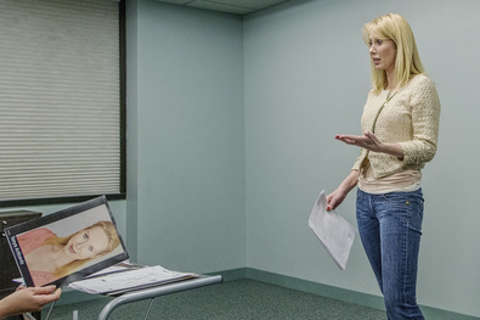 This hands-on workshop setting will allow participants to work individually with top Casting Directors on their audition technique.
Participants will prepare their own material and will have ten minutes with a Casting Director to perform and receive feedback on their "audition".
Casting Directors will address Headshot and resumes as well as performance and give substantive feedback and/ or re-direction in order to best prepare you for your next real-life audition.
Material must be no longer than two minutes, either a monologue or a scene. If bringing a scene, please bring an extra copy of the sides for the Casting Director and your headshot and resume.
Bringing your own material ensures you can be as prepared as possible for this audition technique master class. It also allows the Casting Director to see how you would cast yourself and give you personal advice.
This is your opportunity to work with some of the best Casting Directors that you might otherwise not have access to.

Beth has won an Emmy for casting Friday Night Lights and been nominated for four other Emmy awards.
She has cast 40 films including Bernie, Sin City and A Scanner Darkly and 13 television shows including Dallas, The Lying Game and the recently transplanted second season of Revolution.

Raised in New York though born in London, casting director Matthew Lessall has made a solid name for himself, chalking up an impressive list of casting accreditations, memberships, titles and casting films that result in award wins and official selections at the World’s most prestigious film festivals. He studied at DePauw University.
Matthew’s casting experience is diverse, casting major network series as well as having held the position of Director of Feature Film Casting at 20th Century Fox and on the indie front, as in-house casting consultant for the Fox Searchlab Writer/Director Program.
Matthew’s credits include Sundance Film Festival standouts, “Rocket Science,” “Mean Creek,” as well as the NetFlix Find Your Voice winner “Almost Kings.” In 2011, he chose to join the tech revolution and became go-to casting for Warner Premiere; Warner Bros. new media arm, casting the mega-successful webseries, “Mortal Kombat,” follow up “Mortal Kombat 2” and season 2 of Wonderland Sound & Vision’s “Aim High”. His “BAIT 3D”, garnered an Official Entry at the 2012 Venice Film Festival and this same year also saw him with two films at the inaugural edition of Paris’ Champ d’Elysees Film Festival, including the Liam Neeson starrer “After.Life.”
After University, Matthew then lived for several years in London, before making Los Angeles his home. His dual nationality (USA/UK) affords him the broad vision imperative to cast in today’s global market. He has cast productions and co-productions for Canada, Germany, Holland, Italy and Mexico. Matthew is a member of BAFTA, ATAS and is currently Vice-President of the Casting Society of America.

Rochelle Rose started her acting career at the age of six, she has worked in print, commercials, voice-overs, television and over twenty films. Most notably in James Cameron’s ‘Titanic’ as The Countess of Rothes, in a BBC version of 'The Tempest' as Ceres, The Goddess of the Earth and most recently she made Lindsey Lohan cry in Lifetime’s ‘Liz and Dick’.
Rochelle has taught drama, produced theater and written entertainment features for ‘InStyle’ magazine and the English daily newspaper ‘The Daily Express’.
As National Director of Actors Programs for the Screen Actors Guild Foundation, Rochelle oversees all of the Foundation’s career empowerment programming; annually producing over 350 events nationwide and reaching nearly 100,000 performers globally. To view many of these programs, visit the SAG Foundation video gallery at www.sagfoundation.org.

Sarah Halley Finn is a Casting Director with over fifteen years of experience, working on a broad range of films that span every genre. A member of AMPAS since 2006, she has been featured in Variety, The Hollywood Reporter and Backstage Magazine. Notable credits include the Oscar-winning CRASH, box office smash THE AVENGERS, and Jon Favreau’s CHEF, which will launch this year’s 2014 SXSW Film Festival.

After earning her degree in Theater from Yale University, Sarah went on to work with the multi-disciplinary Off-Broadway company, Ensemble Studio Theatre. In 1997, she joined Paramount Pictures as the Director of Features Casting, and subsequently began a successful partnership with Randi Hiller. The Casting Society of America awarded Sarah with the Artios Award for Best Feature Film Casting for her work on CRASH.

Six years ago, Sarah established her own company and has continued to expand into the Marvel Universe with the recently released IRON MAN 3, THOR: THE DARK WORLD, and the upcoming films CAPTAIN AMERICA: THE WINTER SOLDIER, GUARDIANS OF THE GALAXY and THE AVENGERS: AGE OF ULTRON. Sarah entered the television world in 2013 with MARVEL’s AGENTS OF S.H.I.E.L.D. on ABC. She has also cast a diverse range of features, such as Martin McDonagh’s SEVEN PSYCHOPATHS, Daniel Espinosa’s SAFE HOUSE and Oliver Stone’s WALL STREET: MONEY NEVER SLEEPS. Upcoming films include Legendary’s GODZILLA, directed by Gareth Edwards, Mark Osborne’s animated version of the beloved classic THE LITTLE PRINCE, and Sarah will be reteaming with Jon Favreau for Disney’s THE JUNGLE BOOK.