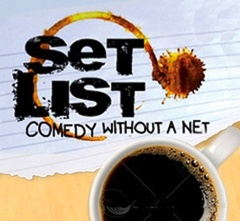 From Paul Provenza and Troy Conrad, Set List: Stand-Up Without A Net is currently a TV series on Sky Atlantic in the UK starring Robin Williams, Maria Bamford, Gilbert Gottfried, Greg Proops, Fred Willard, Drew Carey, Reggie Watts, and more. Comics are given outrageous, never-before-seen topics onstage, and perform seamlessly as if its the act they normally do while the audience follows the absurd, original topics on a projection screen.

This international sensation returns to SXSW from sold-out shows at festivals in Edinburgh, Melbourne, Montreal, Toronto, Austria, and beyond. With a recent run in Cairo, the show is also in production as the world's first improvised stand-up show in the Middle East. Set List runs monthly at UCB and Nerdmelt in Los Angeles, and runs weekly at the Comedy Cellar in New York City. The show is also currently a 60-episode web series on the Nerdist Channel with a new episode every Friday.

Adam Cayton-Holland was recently named one of Esquire’s 25 Comics to Watch. He has appeared on Conan, ABC’s Happy Endings, and was featured on the Nerdist and Sklarbro County podcasts. Cayton-Holland has also performed at the Montreal Just For Laughs, Bridgetown Comedy and Rooftop Comedy festivals, and recently launched his own comedy festival in Denver, The High Plains Comedy Festival. His monthly show and web series The Grawlix is a critically-lauded darling child that you should know and love, and they recently filmed a pilot for Amazon Studios called Those Who Can’t. Adam also has a podcast, My Dining Room Table.

Greg Proops is a stand-up comic from San Francisco, currently living in Hollywood. He's best known for his unpredictable appearances on Whose Line is it Anyway?, and can be can be seen on series' latest season on the WB. Mr. Proops has been a guest on Red Eye, The Late, Late Show and Chelsea Lately on E! His hit podcast, The Smartest Man in the World, has recorded live in Australia, New Zealand, Montreal, Edinburgh, Dublin, San Francisco, Oslo, Amsterdam, Austin, London, Paris aboard a ship in the Caribbean and somehow, Cleveland. Find it at Proopcast.com or iTunes.

Paul Provenza has been a major name in stand-up comedy for decades. He is the co-creator and director of the critically acclaimed comedy/documentary The Aristocrats. He has written, produced, and starred in several comedy specials, including the comedy talk show Comics Only for Comedy Central and his own one-man show for Showtime, The Incredible Man-Boy. He is an artistic consultant to the Montreal and Chicago Just for Laughs festivals, and co-produced and starred in The Green Room with Paul Provenza for Showtime. He is the host of the acclaimed Sky TV series and stage show Set List.