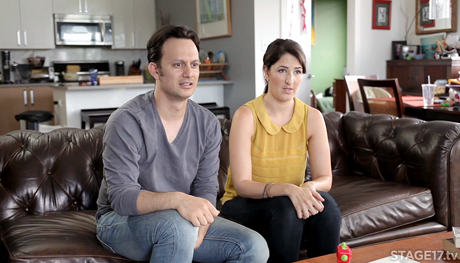 D’arcy Carden has performed improv all across the country as a member of the UCB Touring Company. She is also super proud (too proud?) of her long running show Gentrify - that ran for years in Brooklyn, before being moved to UCB East. You can see D'Arcy on the internet in funny vids and web series like Hello Dum Dum, Rhonda Casting, and Terrible Babysitters (co-written by and co-starring Michael Kayne). She has appeared on Comedy Central, Animal Planet and ESPN and can be seen in the upcoming movie The To-Do List.

Jon Gabrus has appeared in HBO's Muhammad Ali's Greatest Fight, Yahoo’s The Fuzz, and the films Flock of Dudes and Awful Nice. He has appeared on NBC's 30 Rock and ABC's Happy Endings, and hosted MTV's The Substitute, Comedy Central pilot Highdeas, and his own show, Gabrus on Rugby, for BBC America. He can be seen on MTV2's Guy Code and Girl Code, Fuse's Hoppus on Music and History's I Love the 1880's. Jon performs weekly at the UCB Theatre in LA with Your F'd Up Family.

Michael is a Filipino-American comedian who performs, writes, and produces at the Upright Citizens Brigade Theatre in New York City. As an improviser, Michael has been seen in ASSSSCAT, What I Did For Love, and Baby Wants Candy; you may have seen him in web videos for Improv Everywhere, Funny Or Die, Above Average, reddit, or College Humor. His writing has appeared on Billy On The Street and @midnight. A pilot he co-wrote and starred in, Good Dads, was recently screened at NYTVF. In his non-comedy life, Michael is a private tutor and will be featured in the soon-to-be-released book, The Perfect Score Project. His blog on education, shityoushouldknow.tumblr.com, has been endorsed by Steven Strogatz and Techcrunch.com, among others.

Nicole is an actress and comedian, and 1/3 of the smart lady group Doppelganger. Nicole has appeared on 30 Rock, Late Night with Jimmy Fallon, Failosophy Charlemagne and Friends, MTV's Weekend Brunch and a Nestle commercial that only runs in Israel. She currently appears on MTV's Girl Code.

Shannon O'Neill is a veteran performer at the Upright Citizens Brigade Theatre in NYC. She performs every Sunday Night in Asssscat 3000 and Fridays with one of NYC's top improv groups, The Stepfathers. She has monthly talk show Strangers Wanted that has a cult following, and she is a cast member of The Chris Gethard Show.