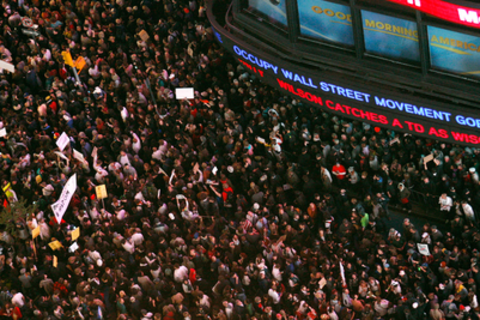 Building new movements is a challenge common to the arts, social change and startup worlds. In each case, barriers to entrepreneurship have fallen dramatically, and as a result, the scarcest commodity has become commitment and action of the crowd. Explore the recent successes of innovative new models of movement-building that aim to transform behavior and the economy.

Andy Ross is the lead guitarist for the band OK Go, who have been called "the first post-internet band" and are at the forefront of an emerging class of independent creative entrepreneurs making art in both digital and physical spaces. OK Go have sold over 700,000 albums, and their self-directed videos have been viewed over 150 million times online, and many more times in museums, galleries, classrooms, and at film, theater and arts festivals all over the world. Their recent projects include an interactive video made with the Pilobolus dance company, a live album chronicling the 180 concerts they played in 2010, performances at The Kennedy Center, Glastonbury and Lollapallooza, collaborations with The Muppets and Sesame Street, and most recently a video featuring a rigged Chevy Sonic performing the song "Needing/Getting" on a rally track loaded with more than a thousand homemade instruments. The band's awards include a Grammy, a Webby Lifetime Achievement Award, a Public Knowledge IP3 Award, two UK MVA's, YouTube Most Creative Award, and countless awards from major film festivals.

In addition to the band, Andy is involved in several tech projects. In
2006, he co-founded and worked as lead programmer on OpenCongress.org, a government transparency website with over 300,000 users, receiving over one million visits per month. Last year, Andy released inBloom, a location-based iOS app designed for the sustainable food and environmental movements. Most recently, he has co-founded Space Inch, a start-up focused on creative, fun apps for Mac, iOS and Android.


James is a partner at social change agency Purpose, where he leads the New Economy practice, working to develop mass participatory initiatives to accelerate the transition away from unsustainable economic practices.

Prior to Purpose, James led major projects on sustainability, technology and economic development for McKinsey & Company, including developing green stimulus proposals for the Australian Prime Minister and former US Vice President Al Gore, developing strategy for the ONE Campaign against global poverty in Washington DC, and leading the Russian national carbon efficiency project in Moscow. During the 2004 US presidential elections, James ran online strategy for a widely publicized campaign opposing Bush administration foreign policy that raised millions of dollars in small online donations.

James's background is in science, and he holds a PhD in Physics from Cornell. He is a fellow at Australia’s Center for Policy Development and an affiliate at Harvard Law School’s Berkman Center for Internet and Society.

Miller’s multimedia performance piece “Terra Nova: Sinfonia Antarctica” was commissioned by the Brooklyn Academy of Music/Next Wave Festival and other presenters. In addition to his award-winning book "Rhythm Science" (MIT Press), his written work has appeared in The Village Voice, The Source, Artforum, The Wire, Rap Pages, Paper Magazine, The Nation, and a host of other periodicals. Miller’s newest book, “The Book of Ice”, was published in 2011. Miller’s work as an artist has been included in the Whitney Biennial; The Venice Biennial; the Ludwig Museum in Cologne, Germany; Kunsthalle, Vienna; The Andy Warhol Museum, Paula Cooper Gallery and many other museums and galleries. He is Managing Editor of Origin Magazine.
www.djspooky.com