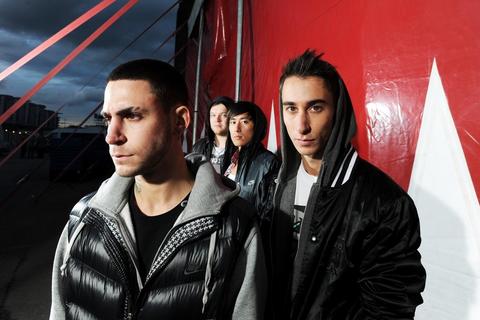 Modestep are a band.

It maybe seems odd that this needs to be pointed out, but so much has been said during their whirlwind rise about what they are or are not that it really bears repeating. Forget “popstep”, “rockstep”, “ravestep”, “rock'n'rave”, post-this, neo-that and second-generation-the-other – Tony (25), Josh (23), Matt (25) and Nick (25) are a band above all. A very modern band, yes, with all kinds of contemporary high-tech twists and flourishes to their sound, and a powerful internet presence, but a real live band nonetheless with weighty songwriting and sweaty, in-your-face performance at the heart of what they do.

Perhaps the confusion is understandable, though: brothers Tony and Josh Friend did come to prominence first as dubstep producers and DJs, of which more in a moment. But before that – for ten years before that, in fact – they were songwriters. The two were avid music lovers from early childhood in the far-flung north London suburb of Barnet, and as soon as they had computers were recording song ideas. Both shared a magpie attitude to music of all genres, with Josh tending to the more soulful sounds of Stevie Wonder, Donny Hathaway and Jeff Buckley and Tony, as his copious and vivid tattoos attest, immersed deeply in the rock world, obsessed with Slipknot, Metallica and even more brutal hardcore acts like Carnifex and Waking The Cadaver. As their adolescence progressed, they accumulated recording gear and honed their songs together and separately, growing in confidence but not quite finding their own sound.

Then came dubstep. The brothers are happy to admit they didn't know the early years of the underground scene, but were converted by the breakout success of producers like Caspa around 2008. The furious energy of the heavier end of the scene keyed perfectly with their mutual love of rock, and indeed they quickly discovered went down well at rock clubs, sending moshers absolutely spare. Like so many others across the planet they were completely enraptured by the sound and its DIY possibilities, and in 2010 they knocked together some tunes at home and threw them up on YouTube. Unlike most of those other fledgling producers, though, they had the musical experience to make something with real depth – so their tracks had real sophistication and, crucially, hooks galore, and spread like wildfire, getting views by the tens and hundreds of thousands in a very short time.

Josh's day job was in computing, and he had the web skills to build on this exposure – so the brothers also set up an internet radio show from their bedroom where they could showcase their productions and other tracks they loved. This too snowballed, with hits building again into the hundreds of thousands. They began getting decent DJ gigs off the back of this, and an offer to release a single via the staggeringly popular dubstep YouTube channel UKF. Not really thinking this would amount to much, the boys gave them the “throwaway” upbeat track “Feel Good” with a cheap home-made video – and before they knew it found themselves on the Radio 1 A-list, with four million YouTube views for the video. All this within just a few months of putting their first track up online.

And here's where the confusion really set in. The radio plays led many to think they were a pop act, the sight of fresh-faced Josh singing in the video even getting some shouting “boyband!”, and a thousand internet forum trolls decided that Modestep were all about cheapening the true spirit of dubstep. But if any of those people had stopped to listen to newer tracks – like brooding “Bite The Hand” which featured on the “Feel Good” EP – they would have realised they were about rather more than that. Because by this point, Modestep were already a full-fledged live band, having recruited Josh's old university housemate and Led Zeppelin freak Matt on drums, with Tony alternating between decks and guitar, with intense and complex songs that reflected their diverse musical background. Their early gigs were fraught with technical worries as they strained to realise that diverse sound, but with each one they won audiences over, proving again and again that they were doing it for real.

And the band couldn't be “dubstep sellouts”, because they never made any pretence to dubstep authenticity in the first place. “We'd never pretend to be original deep dubstep,” explains Tony, “because we were never a part of that. What turned us on to it in the first place was the filthy high energy stuff, and that's still what we like to hear out.” There's no question that as producers, Tony and Josh nailed the dynamics and furious buzzing energy of that hyped-up second-generation dubstep, but they always did it to support their songwriting, not for its own sake. To them, electronic production, DJing and warping basslines are simply more ways of realising their musical ideas.

So from their very first YouTube tracks, the dubstep elements were just the catalyst that allowed them to synthesise a kind of songwriting and production style that brought together everything they had grown up with. Modestep are not simply “dance/rock crossover” but attempting to join a tradition of massive acts who see beyond the guitar-band format to bring technology and performance together to create something ultra dramatic: from Pink Floyd to Muse, Slipknot to Pendulum, their influences are sonically ambitious and theatrical on a gigantic scale. They're completely unabashed when Tony says “there's a real stadium aspect to our sound and what we do, I think you realise that if you see us live”, or Matthew says straight out that the band's key ambition is “main stage at Glastonbury.” Josh goes so far as to cite Michael Jackson as his biggest performance inspiration - “The 'History' tour was the first show I ever went to, and that was pretty much perfect as a spectacle, that's the touchstone right there!”

So now the boys have the task of proving themselves out in the real world. Set up with their own MAX imprint, they are now thinking in strategic terms, rather than just getting the next track or radio show out and hoping for as many hits as possible. That means getting singles out that show the different sides of the band before their album drops, and, most crucially of all, gigging, gigging and gigging. They've played dubstep and drum'n'bass raves, metal shows, indie toilets and everywhere in between. They've played big halls and clubs with sweat on the ceiling that have been, as Matt says, “so small we used all the oxygen up.” For playing big bills and festivals, they've now honed their set to get eighteen tracks into half an hour. “There's no let-up,” says Tony, “we've taken a razor to it and shaved off every millisecond that doesn't need to be there, so someone watching doesn't have a moment to go 'what is this?', they just have to go with it.”

Now turbo-boosted by the addition of guitar sensation Nick Tsang, the band are currently booked to play both the rave-mental Glade stage at Glastonbury, and to the metallers at Download. They've got the USA in their sights, where the likes of Skrillex have already brought a spectacular rockstar mentality to the dubstep scene; “we can thank him, I think,” says Tony with some trepidation, “for setting up an attitude to music that means people should get what we're about over there.” And they're very happy to have ever more girls in their audiences even though they are quite happy to admit (Tony again) “it's definitely quite an angsty, boys' thing in many ways.” Yet they've only existed as Modestep for a matter of months – an insane, rollercoaster few months indeed, but still a very short time – and they realise that there is still everything to do and everything to prove.

So once again: Modestep are a band. They might be a band that sounds like nobody else, that uses the freshest sonic elements, that's been through a maelstrom of hype, that have some pretty stratospheric ambitions, but they are still just a band, and need to be appreciated as such. “I say this all the time,” says Tony, “but never mind the videos or the shit that people chat on forums, if you want to know what we're about, come and see us live.” Just as a new generation of superstars like Katy B, Tinie Tempah and Skream & Benga are starting to forge their own identities above and beyond the grime and dubstep scenes of the last decade, so Modestep are pushing out to show that a band can do this too. And as their hundreds of thousands of loyal fans, online and on the gig circuit, can attest, they're doing pretty well so far.