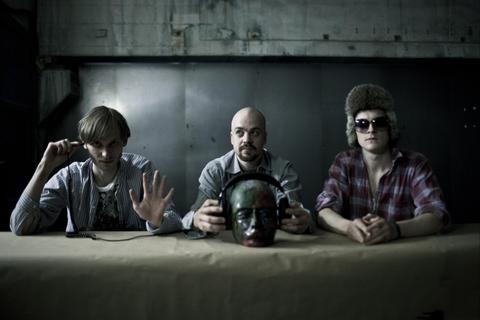 And now, as unlikely as it may once have seemed, here it is, their
debut album. A lot has been going on with the three boys. One thing at a time, however.

Let us start with an accolade: first proffered by no lesser figure than
Michael Rother, who played a number of shows
together with the Camera boys. Further proof that Camera hit the
genuine Krautrock nerve with their music was a joint gig with Rother
and his old comrade Dieter Moebius (Cluster, Harmonia). The pioneers of 40 years ago have taken note of Camera’s qualities, both supporting and promoting them.

And what of the “Krautrock Guerilla” epithet? Well, Camera like nothing better than playing spontaneous concerts in public spaces, without permission of course (to be watched on YouTube et al.). Seeing Camera live for the first time occurs less commonly in a concert hall than in an unexpected, surprising location: an underground station in the middle of the night, an underpass or even public toilets. The threesome set up their minimalist drum kit (snare, floor tom, cymbals and headless tambourine) and two amplifiers, plug in their guitars and synthesizer and off they go. Much to the delight of the audience. Less to in the case of guardians of the law...

Another of Camera’s specialities is to sneak their way into highly official after show parties (German Film Prize, Echo Awards etc.), arrange their portable equipment in a matter of minutes and play for as long as it takes for the security to realize they are not part of the official programme. They actually performed in the gentlemen’s toilets at this year’s Echo Awards. This is their way of unleashing themselves on an unprejudiced, unprepared audience, meeting with an enthusiastic response.

Anyway, here they are with their debut release - the high standing album "Radiate!" (Label: Bureau B/Releasedate: 03.08.2012). At first, the three musicians were not the slightest bit interested in recording, they just wanted to play, play, play. Yet, as time passed, form and structure increasingly appeared in their improvisations, with the potential to be crafted into individual tracks. With a little suasion, they were ready.

The next surprise in store was how successfully Camera transferred
their spontaneity to the studio. Never really sounding constructed or
orchestrated, these tracks could just as easily have been recorded on
the street – apart from the audio quality, of course. This is partially due
to the fact that the album was recorded "live" in the studio.
Camera’s musical spectrum ranges from driving motorik rock to serene, epically flowing tracks by way of foreboding soundscape ridges. In other words: it can be right in your face or elsewhere in interstellar spheres, where time and space have no meaning; cosmic/kosmische music! One can clearly hear the influence of their paragons, NEU!, Harmonia, Cluster and La Düsseldorf.

Camera have taken Krautrock onto the street, straight to the people,
making the magical achievements of German musical pioneers
accessible to a wider listenership with their guerilla tactics. We cannot
thank them enough for that. And now, at last, you can enjoy Camera in your own home.