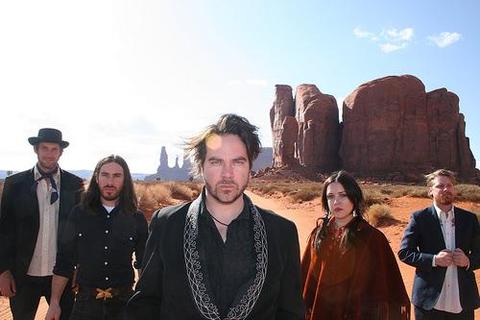 Spindrift is a cinematically-driven, psychedelic western/rock band created by singer-songwriter-composer-producer Kirpatrick Thomas. After a career spanning over two decades, the group continue to create music, tour rigorously, and act as a mainstay in the independent film and music scene. They currently have five full length albums available. They have toured the U.S., Canada, and Europe with bands such as The Dandy Warhols, The Black Angels, Dead Meadow, Black Rebel Motorcycle Club, Black Mountain, and are featured on many soundtracks and films (such as “Hell Ride” produced by Quentin Tarantino). Founded in 1992, Spindrift originated in Newark, DE and moved to Los Angeles, CA in 2001 where they re-formed to include Bobby Bones (Psychic TV), Dave Koenig, Frankie Emerson and Rob Campanella(The Brian Jonestown Massacre) and Jason Anchondo(The Warlocks). The early East Coast version of the band was experimentally driven, but inspired by their locale, the band began a new stylistic approach evoking the spirit of the Old West as mythologized by Western Cinema, Spaghetti Westerns in particular.. The band is currently based out of Los Angeles, CA.

In 2005, Kirpatrick Thomas and filmmaker Mike Bruce(director for Noel Gallagher of Oasis fame) began production of the independent feature film The Legend Of God’s Gun, inspired by the same classic Western Films that influenced their music, most often those directed by Sergio Leone and scored by Ennio Morricone. The release of this film in 2008 garnished much attention and landed their song “Indian Run” in the feature film Hell Ride produced by Quentin Tarantino. In 2008 Tee Pee Records re-released the soundtrack to The Legend of Gods Gun and the band toured the United States, supporting for The Dandy Warhols. Spindrift released “The West” under the Dandy Warhols’ Beat The World record label in Nov. 2009.

In 2010, Spindrift went on to supply the score to Mike Bruce’s next feature “Treasure of the Black Jaguar“(released in theaters Jan. 9, 2013) as well as scored the film DUST UP(Directed by Ward Roberts and starring Amber Benson, released Oct. 2, 2012 VOD/On Demand/DVD/Soundtrack). Spindrift has also contributed to the VBS.tv VICE documentary series “Coffin Joe”. The songs “Ace Coletrain” and “Girlz, Booze, Gunz” were featured in the HBO Comedy series Eastbound & Down. Many tunes were also used in the 2012 film “El Gringo”, featuring Christian Slater. The band is also versed in scoring restored versions of surviving films-such as the works of director J.X. Williams.

The current lineup has performed at SXSW 2010, Psych Fest III, & V, toured the USA with The Black Angels & Dead Meadow, and toured Europe with Black Rebel Motorcycle Club, Black Mountain, and Kurt Vile. In December 2010 after a seven week U.S. Tour and following a successful Kickstarter campaign, the band recorded the album Classic Soundtracks Volume 1 at Hicksville Trailer Palace in Joshua Tree, CA. In Spring of 2011, during a two month tour of Europe, the album was released on Xemu Records. Classic Soundtracks Vol. 1 featured 14 theme songs to various film scores and up to 8 different directors participated in the project. The film clips, music videos, and movie trailers were all premiered on IFC.com(Independent Film Channel) and crossed genres such as Bollywood songs, Science fiction, Exploitation films, and Film noir.

In the Fall of 2012, the band embarked on a “Ghost Town Tour” for four weeks across the Western United States. This unique venture was documented by Director Burke Roberts and crew and is set for a dual film and album release in 2013 under the title SPINDRIFT: GHOST OF THE WEST. A US Tour with Gram Rabbit is underway and Spindrift will continue to headline their first European Tour in June 2013. Michelle Vidal has since joined the ranks replacing Sasha Vallely.

The show at Hotel Vegas Patio on Thursday, March 14