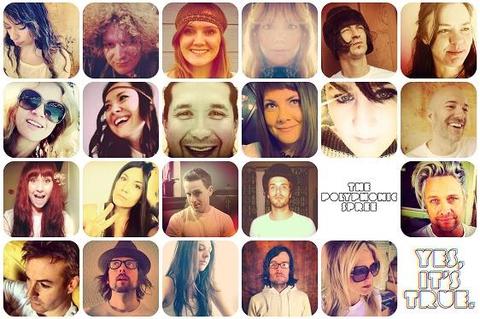 Listen to You Don't Know Me

Yes, it’s true. The Polyphonic Spree began July 15, 2000 as one man’s desire to hear a sound he dreamt about; before most bands over the last decade, that are often compared in sound and vision to the Spree, were formed.

Yes, it’s true. The Polyphonic Spree have traversed the globe several times over, much to the dismay of those that thought the band would never leave its hometown of Dallas, TX. They have appeared at every major music festival and on every late night television program.

Yes, it’s true. The Polyphonic Spree has ranged in size from 13 to 27 members. It has never been about the size but about the sound. The band currently has 22 active members.

Yes, it’s true. The Polyphonic Spree have released four full length studio albums up to this point: ‘The Beginning Stages of…,’ ‘Together We’re Heavy,’ ‘The Fragile Army,’ and ‘Holidaydream.’

Yes, it’s true. Tim DeLaughter has scored the motion pictures “Thumbsucker” and “Visioneers.” He also wrote and performed the Emmy nominated theme song for the Showtime series “The United States of Tara.”

Yes, it’s true. The Polyphonic Spree had a VERY busy year in 2012. They recorded their Holiday album ‘Holidaydream: Sounds of the Holidays Vol One’ as well as ‘Yes, It’s True.’ They toured the USA by breaking it up into three phases of their “You+Me” tour which culminated with the audio and video recording of their New York City Webster Hall show which will be released this year. They played the historic opening of Klyde Warren Park in Dallas. They performed for the first time their rendition of “Rocky Horror Picture Show” in London on Halloween night; it was a resounding success. The band will perform it at select festivals in 2013. The band concluded the year by taking the 10th anniversary of their legendary xmas show on tour. The Polyphonic Spree Holiday Extravaganza played to ecstatic audiences in Los Angeles, San Francisco, Chicago, Philadelphia, New York, and Dallas. They will do the same in 2013 in between the 2 year touring cycle for ‘Yes, It’s True.’

Yes, it’s true. The album ‘Yes, It’s True’ was produced by The Speekers (Tim DeLaughter and Julie Doyle) & Eric Drew Feldman (PJ Harvey, Captain Beefheart). Tim and Julie had previously worked with Eric Drew on Tripping Daisy’s ‘Jesus Hits Like The Atom Bomb’ and The Polyphonic Spree’s ‘Together We’re Heavy.’ The album was mixed by and includes additional production by Tim Palmer (Pearl Jam, U2).

Yes, it’s true. The Polyphonic Spree is releasing their brand new album May 28, 2013. It contains 11 songs ranging in scope from the upbeat album opener “You Don’t Know Me” to the powerful closer “Battlefield.” Musically and lyrically, ‘Yes, It’s True’ is Tim’s strongest work yet. Lyrical themes range from the heartfelt “You’re Golden”, the mantra refrain of “Raise Your Head”, the playful improvised “Heart Talk,” and the tent-pole of the album “Blurry Up The Lines,” which deals with breaking away from the norms and our inner most comfort zones.

Yes, it’s true. There is somewhat of a new and different sound on the album than in the past: embracing drum machine, and orchestral instruments breaking out more on their own rather than heavy winded sectionals so to speak; while all of the Spree's instrumentation is present. The feel is different. “I always enjoy a date with my Linn drum machine. Once I set the mood and tone I go from there in terms of songwriting,” says DeLaughter. “It's really not a coincidence since drums were my first instrument as a kid. My first set was made out of Baskin Robbins empty containers. Later on I was in a rock band in 9th grade and they kicked me off the drums; I was replaced by someone much better at drums. I was bummed but they said I could sing. That's how it started.”

Yes, it’s true. The album was recorded in stages. “The process of this record was probably the most unorthodox to date, at least for me. There were many different sessions and at one point we stopped to make a holiday album. Imagine that for headspace. The year 2012 was a very busy time for us and we had more on the plate than previous years. I tend to bite off more than I can chew at times,” laughs DeLaughter.

Yes, it’s true. “The songs here are from many different periods in the last few years. One or two written a few years ago, a few just a couple of days before recording and a couple created right on the spot in the studio session. Guess you could say it has "range." I wondered if all these songs would work together on one album,” DeLaughter pondered. “I then decided not to worry about it and embrace. As long as each one had an element I was inspired by, whether it was a beat, a lyric, a melody, bass line, etc, I knew I could get excited about it and take it some place. This record feels like a collection of "songs" rather than a long listening piece which we've done previously in the Spree stylistically. It's kind of refreshing.”

Yes, it’s true. This album has a bit of all Tim DeLaughter’s influences. “I enjoy all sorts, always have. From Burt Bacharach to Talk Talk and classic sunny/orchestral pop, it's there. I’ve been known to fly to the sounds of Percy Faith,” chimes Tim.

Yes, it’s true. The statement/album title represents one’s quest and strife for honesty; whether the conclusions are good or bad, we all get an "E" for effort. In the end truth always wins.

Yes, it’s true. The Polyphonic Spree continues on in the studio and on tour.