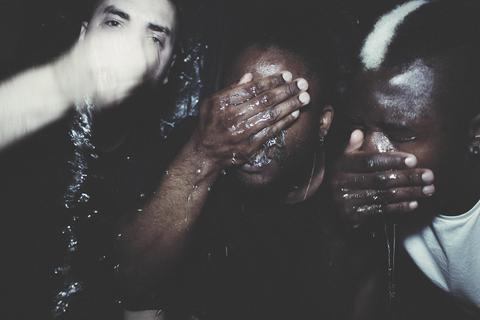 Ol’ Dirty chose his moniker because there was no father to his bastard style. Young Fathers earn theirs by making something so fresh it doesn’t yet have a name. These are three fellas from Edinburgh who’ve been working together since they were 14, who have an elastic mind meld that mimics their fused sensibility of sound, who one day locked themselves in a dingy Scottish basement and came out with something that’d never been done — a fearless combination of beat, rap and song that smells not only of its dark and dank birthplace, but of discovery and of communion.


They are vocalists and perfectionists all three: Alloysious born in Liberia, Kayus raised by Nigerian migrants, and G who also provides the score. Together, they croon like a left-field rock band or a ‘90s R&B group, or rhyme like scions sent either from the D.A.I.S.Y. age or some dystopic future, and do so over production that pulls as much from ancient African tradition as it does contemporary electronic futurism. They make their own posters and direct their own videos and throw their own shows and all of it is superb because they are telepathic and self-sustaining.

If their aesthetic sometimes seems bleak, it’s only because the world outside is, and YF are a mirror reflecting our hard truths back. But they are also our imaginations running weird and wild, finding color in dark corners or dancing in light nobody else sees. It should come as no surprise, then, that their debut EP, Tape One, moves both with the unlikely grace of TV on the Radio and the jittery unease of Shabazz Palaces, at times even harking back to the subterranean soul of P.M. Dawn. How did we get here? You’re asking the wrong question. Where will we go? Listen and see.