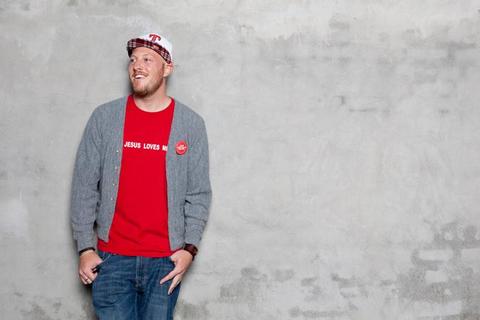 Listen to No Angel

The MC known as Playdough is a rare story in Texas hip-hop. While much of the state is populated by artists who are content to achieve regional fame, and boast about it as if they have taken over the world – this is Texas after all, where everything is “bigger” – Playdough remains humble though his career has literally taken him all over the world. He recently hit number 2 on the CMJ hip-hop charts as well as cracking the Top 200.

Nothing about this MC is typical. His name refers to the playtime cornerstone of everyone’s youth, the colorful clay modeling compound known as Play-Doh. But he’s no toy, and he’s definitely not here to be shaped by anyone’s hand, but his own.

His real name is Doug, and that played a role in his choice of moniker, but there’s a deeper meaning behind the name. “I try to change my style up and do something unique for each song,” Playdough explains, “shaping a melody, cadence and rhyme scheme.” Much like a sculptor might do when approaching a new piece. One listen to any of Playdough’s releases and you’ll see that he puts the art before anything.

Playdough came up as a battle MC, known for surprising crowds with his deft wit and complex off top freestyles. He’s the top Dallas freestyle rap champion of Monday Night Fights for two years running and has won five times on 97.9 The Beat’s Freestyle Fridays. He’s also won the Skribble Jam TX Battle and most recently was asked to participate in the prestigious invitation-only Red Bull Emcee competition.

Not content with the life of being merely a successful battle rapper, Playdough auditioned for a show on MTV called The Cut. Hosted by the late Lisa “Left Eye” Lopes, Playdough competed against talented artists like Anastasia, and Big Al from the Good Life. He made it to the finals of this celebrity judged talent competition, a precursor to shows like American Idol, impressing the likes of Montell Jordan, Dru Hill, KRS One and Treach,
and was soon offered a record deal with the Seattle based label Uprok Records.

Uprok Records was distributed by Tooth & Nail / EMI. Focused on releasing rock and punk music, Playdough was one of the label’s first underground hip-hop artists, releasing his debut Lonely Superstar in 2002. This led him to his life on the road as a successful touring artist.

His life on the road, and his positive, intelligent rhymes led him to release his second album Don’t Drink The Water on Chicago-based, Sony distributed, 7spin Records, which again was a label known more for rock than rap. This turned out to be a step in the right direction for Playdough as he got to tour with a lot of bands – namely Mutemath, P.O.D. and Switchfoot — and play in many different circumstances.

“I like being the only rapper out on a tour with a lot of rock guys,” Playdough says excitedly. “A lot of the time people come up to me and tell me that this was their first hip-hop show, or that they don’t really listen to hip-hop but they really like me and plan to check more of it out.”

Soonafter, Playdough connected with Mustard Records in Australia for his Australia-only release Goodonya. A band called Brethren called and asked him to accompany them on the road in their home country, he spent three weeks with them on the other side of the world, and the rest is history.

But it’s his first indie release, Hotdoggin on his own Writer Dye Wrecords that has really started getting this diverse and highly motivated MC his just due. The singles, and compelling videos for “Ya Heard (with Mr Dibbs and The Black Keys)” and “No Angel” have been featured on some of the biggest music blogs as well as being listed as best hip-hop act by the Dallas Observer in 2011 and nominated for best rap/hip-hop act for the Dallas Observer Music Awards in 2012. Playdough was also recently listed in AllHipHop.com's Top 50 Underground Acts. It’s a real culmination of everything Playdough has learned on his path to becoming such a highly respected MC.

The album touches on all sorts of styles, and features Gift of Gab from Blackalicious, Mr. Dibbs vs The Black Keys, Deepspace5, PicnicTyme, Harry Krum and lots more.

With all of these accomplishments under his belt, you’d think that by now you’d know more about the MC known as Playdough. But instead of composing Texas-sized stories about himself, he’s been putting in the work, achieving success, and moving on to the next mission.

With no plans to stop anytime soon, you are sure to see this legendary MC in a city near you very soon.