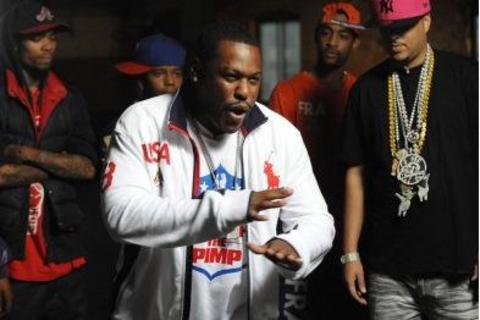 “From Portland, Oregon to Portland, Maine, people know my name,” says Wais P in a rehearsed delivery. The emcee is not talking about his Rap career, which spans back to the glory years of Roc-A-Fella, where Wais’ and his Ranjahz bandmates were artists within Jay-Z’s infrastructure. He’s talking about pimping.

While the Crown Heights, Brooklyn native has remained active in Hip Hop circles throughout the last decade, working with DJ Premier, Maino, Statik Selektah and others, Wais P’s authentic raps come from another life rarely talked about in Hardcore East Coast Hip Hop. “I’ve been in the Bentley and the big house, all that – without Rap. I had a $400,000 deal with Def Jam, and I made more in this life than music.” The reason Wais P is releasing his solo debut, Pimpin’ Saved My Life on Man Bites Dog Records this fall, is because it’s his first love.

Once a teenage Hip Hop sensation, Wais recalls sharing Chinese food with Memphis Bleek in the mid ‘90s, recording with Easy Mo Bee and taking heed to the words of the man he considers a brother, in Jay-Z. . “The only reason I’m doing it is no one else is. Jay used to always tell me, ‘Listen to the radio and make what’s not on there.’ Pointing to artists like the late Pimp C, Suga Free and Ice-T, Wais P explains that while Pimp-Hop has been around for sometime, there is no soundtrack for the east coast metropolises, such as New York City. “A lot of the people drivin’ around Maseratis and Benzes and you think they’re drug dealers. They’re not. They’re pimps. And they don’t have a voice.” Wais P looks at his lifestyle and asserts that he doesn’t harm people, and is raised with a code of honor rarely seen in the cutthroat streets he comes from. Rather, Wais, who sold drugs in his teens explains that his vocation has prevented him from dangerous consequences to himself and others.

“A foreman doesn’t hammer a single nail, and he makes more than the construction workers,” quotes Wais, recalling a Katt Williams point about pimping. “Even in my career, the record label hands you an advance. You go out and record with it. They want to multiply it X amount of times of it back in sales. That’s pimping. The whole world is made up of pimps and hoes,” says Wais. “I get to rap about it now. And it’s my life. You put my name in the system, it’ll come back pimp pimp pimp pimp positive!”
Following the success and acclaim of Wais’ sanctioned mixtape with longtime collaborator DJ Premier, Primo Pimpin’, the artist’s original material charts his range. “I’m all over the board with it, ‘cause it’s a menagerie. I want people to see that I can do anything with the music,” notes Wais. Pimpin’ Saved My Life producers include Harry Fraud, Tha Bizness and Statik Selektah. Vocal guests include Maino,Sean Price, Roc Marciano and newcomer Joey Bada$$. After 16 years from being a teenager on a major label to Wais P’s solo step forward, he admits “Now’s the time, and I get to be brand new.” Listeners soak up the game and understand the name this fall with Pimpin’ Saved My Life.