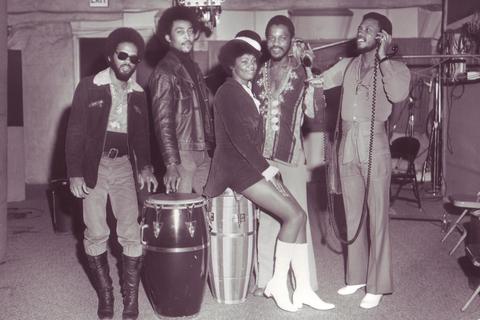 Hi Rhythm is known as being the house band for hit Memphis soul label Hi Records during the 1960’s and 70’s. They are one of the few bands from this era that has stayed together and maintained all its original members. The band includes the three Hodges brothers, Rev. Charles Hodges (organ), Leroy Hodges (bass), Mabon “Teenie” Hodges (guitar), together with drummer Howard Grimes and Archie “Hubby” Turner (keyboards).

Hi Rhythm’s distinctive, warm, swirling soul sound was a major ingredient in the success of Hi Records through the 1970s. Three members of the Hodges family played guitar, organ and bass for the group; their naturally close-knit, familial warmth brought a unique, intuitive groove to the group’s sound. Hi Rhythm helped define the sounds of the classic Memphis soul music genre. By the mid-1970s, they had appeared on nearly 20 gold and platinum albums and countless chart hits for Al Green, Ann Peebles, Syl Johnson, Otis Clay and others. In 1976 the band recorded a solo record for Hi Records, entitled On the Loose, which was recently released on Fat Possum records.

Mabon “Teenie” Hodges acts as the leader on the band. Along with Al Green, Teenie wrote such hit songs as Take me to the River, Love and Happiness, and Here I am (Come and Take Me). In 2006, many members of Hi Rhythm appeared on Cat Power’s homage to Memphis soul LP, The Greatest. In 2012 Filmmaker, Susanna Vapnek completed a documentary on Teenie and Hi Rhythm entitled, Mabon “Teenie” Hodges- A Portrait of a Memphis Soul Original. Due to Teenie’s emphysema Hi Rhythm rarely plays outside of Memphis. The band continues to record on sessions for musicians like Boz Scaggs at Royal Studios in Memphis on a continual basis. Hearing Teenie sing his songs live with Hi Rhythm is a rare treat for any music fan.