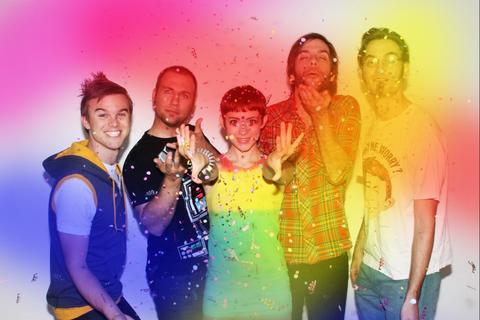 Born out of intense personal hardship, Les Rav is the musical brainchild of Lauren Bruno, an energetic and waifish young woman who’s cheery demeanor hardly belies the haunting ethereal quality of the melodies she composes. To Bruno, Les Rav represents many things – certainly music, but also a very important message and artistic connection. The multifaceted nature of the group’s musical efforts is a crucial element for the rest of the band, which includes Caleb Hans on violin,David Thomas Jones on bass, Robert Wills on drums, and Andrew Noble on guitar and viola.

Bruno, keyboardist, songstress, and writer of the band’s material arrived here in Austin after completing her artistic education at the Berklee College of Music in Boston. With evident songwriting ability, a dulcet voice, and her keyboard she is determined to artistically translate, share, and grow from her experiences. Diagnosed with ulcerative colitis early on in life, Bruno has had her fair share of illness and hard times. However, she has taken these challenges in stride and used them to not only make her stronger, but to connect with the human experience at large through her music. “Les RAV really started out as something that was healing for me,” she says; “The name started out being a place I could reach peace with myself through all the hardships.” While her music may be rooted in her personal struggles, the name of the band is similarly rooted in Bruno’s personal history. She explains, “I was raised Jewish and was in the choir starting at a very young age. I was very connected to a song called Shalom Rav which means abundant peace. I was looking up French words and I stumbled upon a translation of to accept or to not refuse and I just morphed the 2 words.” The result? Les Rav was born.

With the addition of its many other members, Les Rav has become far more than your average band. The group not only utilize eclectic and often hypnotic instrumentation, but also lists a wide array of influences – Frank Zappa, Jimmy Hendrix, and Sufjan Stevens just to name a few. Bass player David Thomas Jones favors the description “classically-influenced experimental indie folk/pop” as a one of the better descriptions of the boundary-blending music they create, but amongst the band as a whole it seems like everyone has their unique interpretation and perspective on what it is that they love about the music they develop and perform. Drummer Wills is particularly enjoys Les Rav’s composition “We Don’t Play Here Anymore.” Why that song in particular? “It was the first song Lauren and I worked on together” he explains. “It was before we had any idea where this band was going or if anyone else would even like it. We didn’t care. We had to get the music out, and that song was the product.”

What is next for Les Rav in terms of “getting the music out”? Ask any of the band members and you will get a determined and decisive set of goals for the group’s future, both in the short and long term . Les Rav seems flush with both aspiration and inspiration. Guitarist and violist Noble sets the record straight with the band’s grounded goals for developing their presence here in Austin, “After we record this album/set of songs we can concentrate on new material that reflects our new status as a band with multiple creative individuals involved.” The band is also looking to be a buzz band at next year’s SXSW and play alongside established bands in the Austin music scene. They are already well on their way. Though they have been together for less than a year, they have already developed an impressive set of accomplishments. Out of six-hundred entries, Les RAV has already been named the #1 songwriter in Austin by the Recording Conservatory of Austin and Judges which includes Producer Cj Eiriksson, Blue October bassist Matt Novesky , and entertainment lawyer Joe Stallone . They have also been fortunate enough to play festivals like Mr. Fest, Pecan Street Festival, Art Outside, Utopia Fest, Oh Snap Fest!, and Fusebox Festival where KLRU-PBS filmed them for the channel’s show “Arts in Context” which will air in July. You may also have seen them playing Chairlift’s after party at The Mohawk.

With a sound that is a mélange of genres, Les Rav’s goals are equally broad, ranging from further creative development to their “Inspire Me” campaign. In the campaign, the band’s message is all the more apparent. The campaign challenges listeners to make a one minute video describing what inspires them, post it to YouTube, and email the link to Lesravinspireme@gmail.com. Clips of the challenge submissions will be included in the band’s current Kickstarter project. For those who are interested, the band members have all crafted their own personal responses for the challenge, which can be viewed at http://lesravinspireme.tumblr.com/.

Music and inspiration are indelibly linked for Bruno, who declares that “through everything, music became more than something you listen to, music and art as a whole is really something purely for inspiration and hope within those tough times.” Clearly she is hardly just a pretty voice. In her case (and that of the band as a whole) musical ability is accompanied by astounding human insight. “It is incredibly difficult to face oneself and accept oneself” she exclaims. “Humans are very complicated. We all make mistakes… but at the end of the day – if we were to all face our problems, our insecurities, our pain, and come to a place of peace with it all, we would all be in a very happy places in our lives always! One must accept peace fully, “abundant peace” in order to truly find happiness.” Luckily for music fans here in Austin, Les Rav is looking to help show them the way.