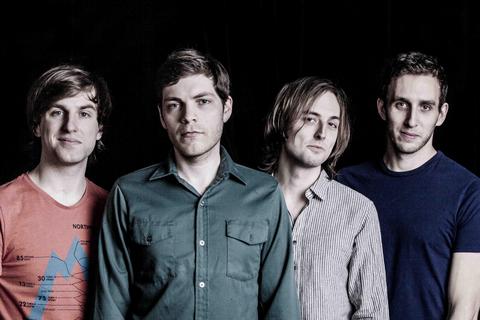 Listen to Amour Than Amis

Two Hours Traffic's specialty has always been unforgettable pop melodies. Now, with a revamped lineup and a new producer behind the boards, the award-winning Charlottetown band have honed their craft and created their catchiest, most focused album to date. Entitled Foolish Blood, it's due out February 19 through Bumstead Records.

Fans got their first glimpse at the new-look Two Hours Traffic in late 2012 with the Siren Spell EP. That tantalizing four-song teaser was replete with electrifying, Motown-influenced arrangements and razor-sharp choruses that were big-hearted and hooky in equal measures. On Foolish Blood, listeners can now experience the full scope of the band's vision.

In the lead up to the recording sessions, previous guitarist Alec O'Hanley parted ways with the group, paving the way for bassist Andrew MacDonald to move over to the six-string with newcomer Nathan Gill taking his place in the low end. Rounded out by singer-guitarist Liam Corcoran and drummer Derek Ellis, the group reevaluated their songwriting style, placing more emphasis on the rhythm section than ever before.

"We built the songs from the bottom up," explains Corcoran. "If you're going to write good pop music, it really has to start with the bass and the drums. Once that was completed, it was easy to do everything else." Naturally, Two Hours Traffic's melodies are every bit as tuneful and hook-filled as ever, and they pack even more of a wallop this time around thanks to the scorching grooves. This is evident on standouts like the surging "Amour Than Amis" and the sock-hopping "I Don't Want to Want You."

In order to capture their new sound, Two Hours Traffic amicably parted ways with their longtime producer and mentor Joel Plaskett and teamed up with Darryl Neudorf (Neko Case, the Sadies, the New Pornographers) at his Operation Northwoods studio in rural Ontario. During an intensely productive two-week session, the producer captured the band's straight-out-of-the-garage energy with gorgeous sonic crispness.

"He really understood the kind of music we wanted to make," remembers Corcoran. "It was a 'eureka' moment for us. We gave him almost free reign sonically. We had faith that we were in the same world and that we would like what he was doing." Chipping in during the sessions were Arkells keyboardist Dan Griffin and pedal steel player Dale Murray, who helped to flesh out an album that focuses almost exclusively on upbeat pop bangers. There's not a moment of filler and only minimal acoustic guitar; every song goes straight for the gut, making this a whirlwind of giddy pop bliss.

The relentlessly uplifting arrangements don't mean that the songs lack lyrical or emotional depth, however. Writing about love is the band's speciality — they celebrate its flourishing on "Magic," struggle with its pain on "Faster 4 U," and question its very nature on "What Is the Meaning of Love." The title alludes to a line from James Joyce's short story "Araby," and encompasses the record's multifaceted, sometimes critical romantic outlook.

With these ever-questioning lyrics and timeless pop tunes, Foolish Blood encapsulates everything that has made these Maritimers one of Canada's best-loved indie rock bands. Over the past decade, they've earned a short list nomination for the Polaris Music Prize, come out on top at the East Coast Music Awards, graced magazine covers, landed TV show placements, and toured across Canada and around the word. Having accomplished so much already, Two Hours Traffic are only getting better.