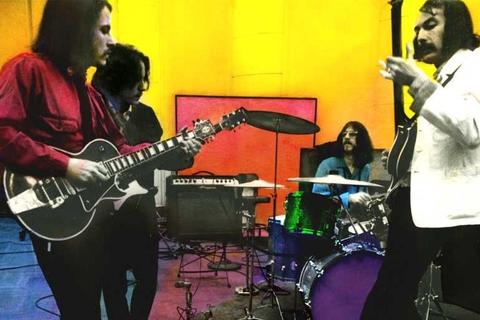 Listen to land of their dreams

From the mid-sixties, Autosalvage was Tom Danaher, Rick Turner, Skip Boone, and Darius Davenport. All having remained dedicated musicians, they are joined now with old friends, Banana (Lowell Levinger), of The Youngbloods) and Sam Page. The original’s unique element of Medieval instrumentation is now added by Mark Davenport, professor of early music and Darius’ brother.

Rick and Tom had been part of the Boston/Cambridge folk scene: Rick, playing on stages with Tom Rush, Taj Mahal, and Richard and Mimi Farina. Traveling between folk meccas, Boston and Greenwich Village, they met up again on Bleecker St. In a month, Autosalvage was formed.
The bassist, Skip (Autosalvage’s living link to Fifties Rock ‘n’ Roll) was brother of Lovin’ Spoonful bassist Steve Boone. Drummer, Darius Davenport, was out of the High School of Music and Arts. He was also joined on the album by his father, LaNoue, of New York’s Pro Musica.

Rehearsing in a shared Village loft with the Lovin' Spoonful, an early gig was with the Mothers of Invention at the East Village club, Andy Warhol’s Balloon Farm. It Frank Zappa who suggested the name Autosalvage, the title of their raucous opening tune.

The band signed with RCA Records, home of friends, The Youngbloods and Ian & Sylvia. Being a band unique, loud, and hard to comprehend … RCA gave them free rein in one of the world’s first 8-track studio, they cut loose. The self-titled album was the result. It was Autosalvage. It was 1968.