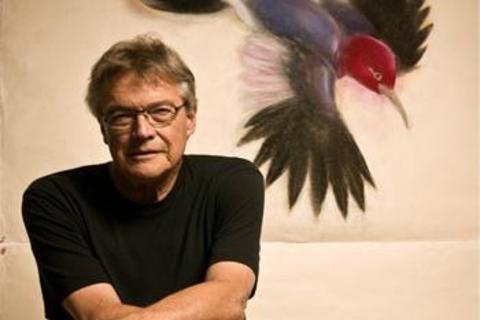 Let’s not mince words here: It’s been a godawful long while since the last time Terry Allen released a collection of new songs. Maybe not record-breaking long — some of his peers in the Texas songwriter and Americana field have bested him by decades — but the fact is,
we haven’t had a new Terry Allen album to savor since the waning days of the Clinton administration. That would be 1999’s Salivation; it’s the one with the painting of Jesus (“Big Boy”) on the cover and songs like the riotous “Southern Comfort,” in which Allen feasts on the delicious irony of self-righteous hypocrisy and gleefully baits anxious Rapture
waiters by trumpeting a Second Coming rife with gotchas: “When Jesus saves the world / All time will stop with sin / And nothin’ will be mysterious / It’ll all just be The End.”
Admittedly, Allenʼs brand of Southern
(dis)comfort may not be for everyone.
But it should come as no small relief to
his patient and not-so-patient faithful
alike that the passage of 14 years hasnʼt
dulled the manʼs razor-sharp, serrated
wit a whit. On his brand new, longawaited
Bottom of the World, heʼs still
licking his chops — this time wryly pondering,
among other things, the nagging
damnation of the saved: “Do they dream
of hell in heaven? / Do they regret how
hard they tried? / And wish now theyʼd
been much more sinful / and repented
just a minute before they died?”
Taboo-taunting questions — not to
mention songs — just donʼt get much more
Terry Allen than that. And yet it would do Allen
ʼs 11th album a disservice to label Bottom
of the World as business as usual, even with
the allowance that thereʼs never been anything
remotely “usual” about Allenʼs artistic
sensibilities. Rest assured that the 11 new
tracks on Bottom of the World reaffirm Allenʼs
standing as one of the most idiosyncratic and
cunningly provocative voices to ever blow out
that peculiarly fertile songwriter hotbed of
Lubbock, Texas. But the presentation is quite
unlike any other record Allenʼs ever made. Coproduced
by Allen and his son Bukka with
longtime collaborator Lloyd Maines (Joe Ely
Band, Dixie Chicks, Terri Hendrix) at Screen
Door Studios in Buda, Texas, Bottom of the
World doesnʼt swagger so much as haunt. The
minimalist arrangements — featuring just the
Allens on keyboards, Maines on guitar and pedal steel, Richard Bowden on violin and
mandolin, Brian Standeffer on cello, and Bukka
ʼ wife Sally on harmony vocals — cast long,
unsettling shadows that throw Allenʼs voice
and lyrics in stark relief, like ghost stories
told over a fire. The effect is every bit as chilling
as Allenʼs 1975 debut, Juarez, but at the
same time warmer and more intimate than
anything Allen has ever recorded.
While songs like “The Gift” and “Emergency
Human Blood Courier” curdle the blood and
make the hair on the back of the neck stand
up, “Sidekick Anthem” and “Covenant” offer
shelter and succor against the dark. “A promise
lost next to a promised gained,” Allen sings
on the later, closing the album with a disarmingly
earnest grace note of reassurance and
hope: “Going to find you / when youʼre lost,
Babe / Going to take your hand / and bring
you home.”

The show at Saxon Pub on Tuesday, March 12