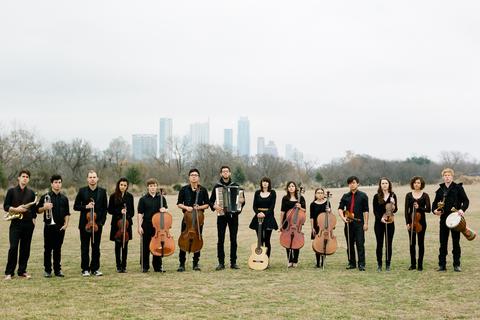 Mother Falcon is an orchestral indie band born in Austin, Texas that has quickly become an award winning recording act and a top concert draw, performing in rock clubs while maintaining a presence in the performing arts scene scoring plays and films.

The group began to coalesce around multi-instrumentalist and composer Nick Gregg while the members were still teenagers, coming together via orchestral and chamber music classes. Composing as a collective, the 18 piece ensemble includes several multi-instrumentalists and most of the players contribute vocals. Guitarist/pianist Claire Puckett, accordionist/pianist Tamir Khalifa and percussionist/saxophonist Issac Winburne form the creative core along with Nick Gregg, though all members contribute musically.

Still Life, the debut EP, was released in early 2010 and spawned the local hit "Marigold." Mother Falcon's first full length, Alhambra, was released in February 2011 and gained immediate raves and heavy spins on the influential public radio station KUT, charted in the top ten on several college stations and hi #61 on the CMJ chart.

At the 2010, 2011 and 2012 Austin Music Awards, Mother Falcon won the "Best None of The Above" award, and performed at the 2011 and 2012 ceremonies. The Austin Critics Table nominated the group as "Best New Ensemble" and for "Best Theatrical Score" in 2011. They also performed as the opening event of the 2011 Fusebox Festival at the Seaholm Power Plant in Austin, Texas accompanied by 100 additional string players and headlined the 2012 Austin Chamber Music Festival.

Currently at work on their second album as well as the score for the indie documentary Star Nation, about the international spectator sport culture surrounding the video game Starcraft, Mother Falcon will move to New York City for the month of June and to Los Angeles during all of August to promote the upcoming album with weekly club residencies and regional touring. In July the band will conduct its second annual Music Laboratory, a summer camp for middle and high school orchestra students.