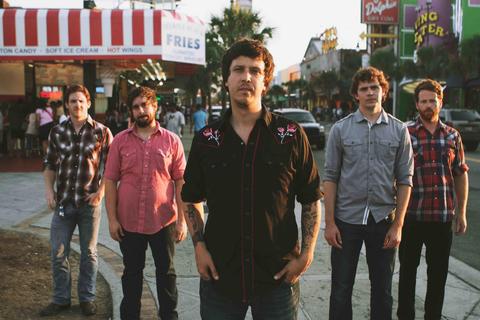 Raleigh, NC – In the business of music, many are called and many may try, but few cross the threshold of being able to say they are truly committed for the long haul. With the upcoming release of their latest studio album, Burn.Flicker.Die. American Aquarium is proving that they have graduated to that class of professional musicians that have made an undeniable commitment to their music and their fans.
American Aquarium’s six years as a band have been a fast-moving blur of rubber on road, touring coast to coast through the states and Europe. Most nights of the year are spent far from their Raleigh homes, squinting out from bright stages at a growing legion of passionate fans who’ve followed them through the release of six albums that reflect a whirlwind of too many whiskey soaked nights, nameless women in smoky bars and fast living while your youth is in full bloom. But what happens when it all stops feeling good?
Burn.Flicker.Die. is what has emerged from that scenario for this group of hard working players. After two years of writing, they journeyed to the legendary recording hub which gave birth to some of the greatest blues, country and rock records of all time: Muscle Shoals/Sheffield, AL. Recorded in eight days under the precise hand of friend/tour buddy Jason Isbell, the record is an aptly named milestone for the band, and their most painstaking effort to date. As a long-time Southern rock artisan, Isbell provided a weathered know-how in producing the record American Aquarium is proudest of. Described as a “consequence record” by vocalist BJ Barham, the band spent that week pushing out everything that’s been haunting them: working for six years, watching buzz bands peak and die, and pining for their own payoff.
“I wish my addictions didn’t mean so much/but we all can’t be born with that kind of luck,” Barham sings on the title track, capturing the fast lifestyle with images of subtle barroom horrors: Finding a high in a dingy bathroom stall, a pretty barfly from somewhere down south you won’t see again, free shots you can’t say no to. “Casualties” is a soaring, chorus-less ode to death by rock that confronts age and the band’s great fear of having made the wrong choice. They’ve watched artists ride the hype train right off the track. But that can’t be American Aquarium – they’ve been laying low too long, finding their way to the most poignant album of their careers through hard touring and waking up to realize that it’s not Saturday night anymore.
Some of the record hurts to hear, like the quiet, fine-spun “Harmless Sparks.” It sounds like the flicker of a solitary cigarette burning to its filter in the blue-black glow of a bar. Keys plink like shot glasses in the background, and you’re the last to go home. American Aquarium has been there before. But the record also looks to the end of a hard road, where there might be validation for good music, and even love. In “Jacksonville,” Barham promises someone a call if he “makes it out alive.” Taking a cue from Ryan Adams, he draws romance out of shame in “Northern Lights.” And in “Saturday Nights” and “Saint Mary’s,” he makes a subtle mockery of the dives they know too well – slick with spilled whiskey and crawling with restless women who all look the same.
Every grizzled image of Burn.Flicker.Die is real, which comes from the band’s profound understanding of small southern town debauchery and six years of pushing their careers off the bottom rung. Like many of their musical heroes that have paved the way before them, American Aquarium can wrap the ugliest feelings in the most spirited soundscape. Sonically uplifting instrumentation and vivid, wrenching lyrics illuminate the dark side of hanging out in rock ‘n’ roll limbo, but also how the band has clawed their way out of it. Through their struggle to sustain their career and resist the temptation of fire, American Aquarium’s demons have hung around. But so have they.