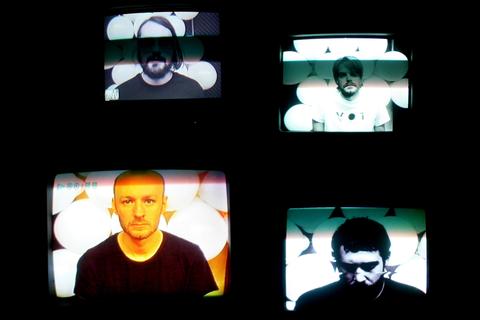 welcome to the beautifully strange world of colourmusic, a place where concept albums — an lp named my _____ is pink in this case—have nothing to do with structured narratives or loosely-linked lyrics. more like musical walls that must be climbed, whether that means shunning acoustic guitars or modeling the rhythm section of some songs after metronomic sex acts.

which isn’t as titillating as it sounds. the way hendrix sees it, “we wanted to focus on human sexuality and reproduction. not in terms of turning people on; from a point of view of fear and anxiety, and how it’s the prominent decision-making force in many people’s lives.”
that explains a couple things, starting with my _____ is pink’s actual sound. rounded out by bassist colin fleishacker, drummer nicholas ley, and guitarist nick turner, colourmusic’s new material amounts to an ever-evolving mass of melancholic melodies, gauzy vocals, shifty beats, and monophonic musical structures. not to mention glimpses of agnostic gospel grooves (“you for leaving me”), hip-shaking r&b (“feels good to wear”), acid-drenched pop (“tog”), and bladerunner-inspired psych (“pororoca,” which means—quite tellingly—“great destructive noise” in many parts of south america).
and then there’s “the little death,” a five-part foray into the outer realm of sandblasted rock, subterranean drone tones, and the kind of headphone-ready hooks that cause weak-willed speakers to spontaneously combust. like a yellow brick road to the second circle of hell (lust, if you haven’t visited dante’s inferno in a while), it’s a ten-minute guide to what makes colourmusic tick. well, sort of. truth be told, the oklahoma-based band isn’t spelling anything out.

“if you write a song that’s too literal, it dates it,” explains hendrix. “we’d rather make things a little more subconscious. it gives a song a longer life span because you never know what’s really going on.”
“the music tells us what the song is going to be about,” says hendrix. “once we have a drum beat, it’s alive. and once we come back to it, it’s basically beckoning us to finish it.”