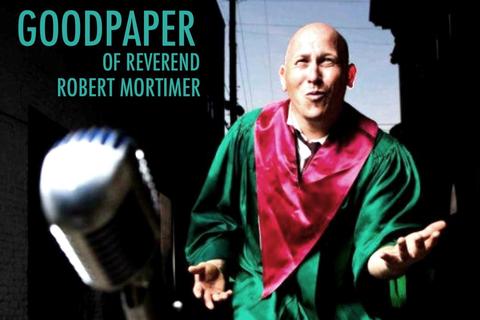 The Trifecta of a Mississippi Delta Blues Artist, a Undertaker, and a Reverend, but the Same Man............

Born and raised in the rich, fertile soil of a Mississippi Delta cemetery in Belzoni, Mississippi, Robert Mortimer bases his songs on personal and un-personal experiences of heartache, love, loss, local religion & politics, Catfish, Cotton, stories & fibs/lies.
Mortimer is also in the family business; a second generation funeral director, embalmer and cemeterian. Growing up in a funeral home has helped Robert Mortimer see the end as a new beginning and enjoy the happier side of bad situations.
With the wit of Tom Waits and the Southern charm of Conway Twitty, his music overflows with dynamic rhythms and pounding bottoms, while his sextronic lyrics are at times both humorous and thought provoking.
After 12 years of touring, the GoodPaper of Rev. Robert Mortimer really tie the room together; the life performances blast energy, as if James brown was swimming in a boiling Mississippi Delta Catfish Pond. With slick, tight funk to the depths of Otis Redding’s last breath, they deliver post-sharecropping blues slammed into sensible popular rock, often resulting in tragically harmful and devastating live performances. From instant wardrobe changes to mean faces, GoodPaper of Rev. Robert Mortimer will have your attention.

Released in 2004, Mortimer's Good Paper album "Peep", was recorded in a old funeral home next to a cemetery in Indianola, Mississippi. Composed of 11 original songs concerning the book of Revelations, Quentin Tarantino, and the hurt inflicted by women, “Peep” was well received by their extensive fan base.
Released in 2010, Good Paper's sophomore album "Our Stupid Selves" was recorded at Tweed Studios in Oxford, Mississippi; This chapter in Mortimer's life concentrated on Mississippi Delta heritage, local economy, almost love, and the supernatural.
Mortimer's songwriting is influenced by “anybody with or without a message," according to Mortimer, naming Muddy Waters, Stevie Wonder, Tony Soprano, George Bush, Ben Harper, JJ Grey, Sly & The Family Stone, John Mayer, John Scofield, past and present girlfriends, Abe Lincoln, Hernando Desoto, animated preacher men, Henry Wadsworth Longfellow, and most of all… JAMES BROWN as contributing factors to the evolution of the band.
In July 2013, a new studio album will split open and melt.