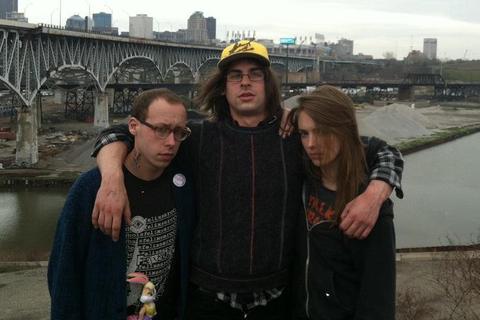 “Bait An Orchard” is proof positive that these dudes are fuckin’ shit up in the best way possible. At times, thunderous toms and commanding vocals lead the guitar-wielding troops into battle. At other times, shimmering, wall-of-sound, air horn six-strings (maybe those are actual horns?) are backed by a barrage of ride cymbals and looped feedback. Like a terribly blended mixed drink, this concoction can be intolerable in incapable hands. Sure, it’ll get you fucked up, but with the Dreebs behind the bar, you get a great buzz and, most importantly, no headache afterwards. There’s subtly nuanced melody apparent on occasion and ethereal vocals here and there. I wouldn’t be surprised if the drummer jammed part time in a free jazz combo, but this dudette knows where/what NOT to play – the most important tool in a virtuoso’s toolbox if ya ask me. I imagine taste-making non-dreebs like Thurston Moore would agree. I can also easily imagine Thurston name-dropping the Dreebs in a future documentary like Kill Your Idols, one where Suicide, Theoretical Girls, DNA, Teenage Jesus and the Jerks, Swans, and Sonic Youth aren’t touted on the same reel as ARE Weapons, Yeah Yeah Yeahs, and Gogol Bordello. The Dreebs deserve to be in that film far more than any of the latter bands. In closing, all I’d like to say is: the Dreebs rule and dreebs drool. This marbled vinyl record is limited to 300 meticulously hand-screened and hand-numbered copies on the ever-interesting Rotted Tooth label and it comes with a DVD and a couple of opposable digits way the fuck UP."
(Permanent Records Editorial)

RECOMMENDED
"The Dreebs are a trio from Brooklyn of prepared guitar, violin, drums, and vocals. This is an experimental rock record, but it is in no way a “free rock” record. This band is incredibly tight and its compositions are very precise. The Dreebs’ songs seem to work by the prepared guitar setting up a metallic drone in front which the drums and violin lock in to patterns that gradually build into climaxes, but this band doesn’t fall into the trap of only playing crescendos that a lot of improvised rock and post rock bands do. The dynamics are very important in this band and are used in a very refreshing ways. The vocals range from whispers and shrieks and come in at just the right times to heighten the tension. The prepared guitar sounds particularly great and adds a tangible, alien quality to the band. I’ve really never heard anything like it. An excellent record."
(Chris Strunk, Dusted Magazine)