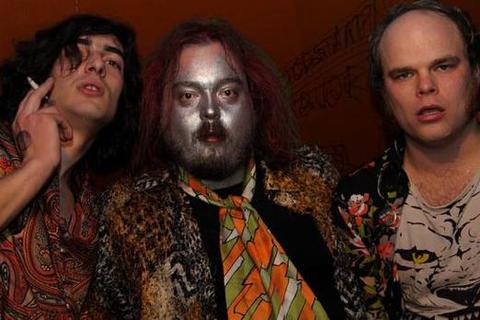 Known predominantly for his work as the frontman of Clone Defects and Human Eye, Timmy Vulgar has spent over a decade being the definition of punk rock. He is also a 2010 Kresge Artist Fellow who was awarded for a “creative vision and commitment to excellence within a wide range of artistic disciplines.” For Timmy’s Organism, Vulgar wrangles up a trio of like-minded degenerates and leads them through dismantled punk, space-blues and debris-sodden noise with deft ease. Debut album Rise of the Green Gorillas, released in 2010 on Sacred Bones, was essentially Vulgar solo recordings, but Raw Sewage Roq is the full band pounding the kind of whacked-out, sci-fi-inspired, skuzzy skronk anyone familiar with his oeuvre would expect. Here, Vulgar jettisons most of the avant, jazzy Beefheartian leanings of Human Eye in favor of a direct, straight-ahead approach that owes more to KBD punk, Alice Cooper-style glam and Hawkwind. That said, “straight-ahead” by Vulgar standards is still pretty damned unhinged. You will hate yourself if you sleep on this one!

The show at Metal & Lace Lounge on Thursday, March 14