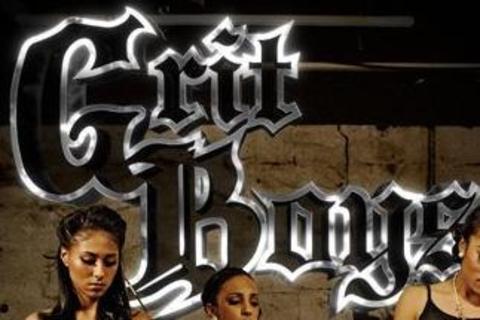 Listen to KNOW WHAT I MEAN

WATCH NOW !! *NEW VIDEO** "UNDERDAWGS" @GRITBOYS Dir x @MoBangMedia https://vimeo.com/45089195
PLATINUM SONG WRITERS/ ARTIST/
COMPANY GBOY ENTERPRISE WWW.THAFIXX.COM/GRITBOYS
@GRITBOYS
@SCOOBY_GRITBOYS
@NIQUEYMONTANA
@GREENGROUCH
G.R.i.T. stands for Ghetto Reality in Texas (the "i" is small because there's no "I" in G.R.i.T. Boys) and these boys are taking back the streets. Their raps are tough, smart and at times revolutionary. They're not gangsta, but they're definitely not soft. They're not on some radio shit, but have the ability to come up with catchy hooks when the rhyme calls for it. And they're not like anything you've heard in the Houston rap game before. These three distinctly different personalities Poppy, Scooby and Unique -- all came up on the south side of Houston and attended Worthing High School, though at different times. Scooby and Niq came up together and have rapped together since they were youngsters. Pretty Todd met Poppy through his work at Gameface Records which is home to Houston legends Hawk and Lil O. Todd was doing production and Poppy was signed to the label. But the funny story is the way Pretty Todd happened upon Scooby and Unique.

Scooby explains, "I got kicked out of Worthing and went to live with my father. I met Pretty Todd one day at my new school. He came in as a substitute teacher. I was making tapes and flowing in the cafeteria and some of the students told Todd about me."

"I walked into school and some of the students knew that I had produced for Lil Flip." Todd remembers. "And they were like 'aw you did some production for Lil Flip? You gotta hear Scooby!' And I was like Scooby? Then I was expecting Scooby to be just some, 'Yeah I put it down.' But he was different. At the same time in my life, I was trying to find where I'm comfortable with my music. So I gave him a beat and I didn't even know if the beats were good or not. I just gave him something to write to." Pretty Todd has also produced for HSE, C-Note, Paul Wall & Chamillion, Hawk, Lil O .They've appeared on Lil O's Fat Rat Wit Da Cheese and Food on the Table CDs, Hawks latest disc and all of his undergrounds including Incredible Hawk, Bad Ass Mixtape and the Underground Shutdown series. They wrecked on some of the Color Changin' Clicks most popular undergrounds including Bobby Booshay 1 & 2, Starvin' Marvin' and K-Mart Blue Light Special. And have also appeared on CDs from SLAB, Dolby D, Jimmy D, Paul Wall, Chris Ward, Big Pokey, Showtyme, Big Baby, Big Shasta and even Killer Mike from Atlanta. Another solid act from Houston's fertile hip-hop scene, Grit Boys carry on the spirit of their mentor, HAWK, with their debut album Ghetto Reality in Texas, a cold blast of hood stories and rebellious, sometimes reckless, rhymes. Besides HAWK, the crew has name-checked Public Enemy in the past when asked for influences, and while nothing here is as revolutionary as PE's words and production, there is that hunger for positive movement forward. Of course, Chuck D and his crew never spoke of sipping sizzurp or delivered club tracks the way Grit Boys do, something that makes this half-responsible, half-hedonistic effort so interesting. "Ghetto Reality" does an excellent job of communicating inner-city strife, while "Fresssh" pops its collar and heads out for the weekend taking the listener along for the ride. Members Poppy, Scooby, and Unique are all equally gifted at writing about the daily grind or the weekend, which not only makes them hard to pigeonhole but also hard to identify when mixed with all the competition. Not helping at all is the huge guest list, featuring everyone from Mase to Bun B, along with a posthumous HAWK appearance and the left-field choice of U.K. rapper Dizzee Rascal. Even if Grit Boys don't arrive with a strong persona and true showcase debut, they've created an overall satisfying and often absorbing hardcore album.

.they have went on to be platinum songwriters, hits like DJ KHALID "HOLLA AT ME" , Paul Wall march n Step feat Lil Wayne .They're own underground releases Nuttin' But W's, Word on the Street and Heart of a Hustler , new south movement, southside of htown ect. Over 50 mixtape releases .Working WITH HEAVY HITTERS LIKE ,DJ SMALLZ, DJ ENVY, DJ RAPID RIC, CHUCK, DJ DRAMA HAVE SOLD out all over the nation and their first above ground release as a group is one of the most highly anticipated CDs in H-Town. They speak directly to the streets and the streets are listening. That's what it mean, Ghetto Reality in Texas. We not drive by shooting, we representing dudes that taking the ends off they bread.
And they've found a whole lot of folks that are willing to listen. You need to be one too.