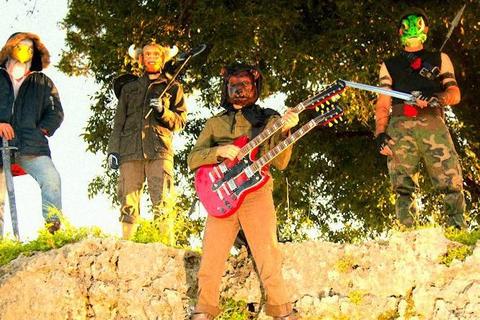 Golden Bear is from Austin, TX. They released their most recent album, "Alive" in late 2011. Produced by Austin's Producer of the Year, Danny Reisch, “Alive” provides a healthy dose of pop and heavy progressive rock, suitable for blasting out of speakers of all sizes. Entirely self-promoted and self-funded, "Alive" won Golden Bear their best press and critical success to date.

After a brief break following SXSW 2012, Golden Bear is back at work in the band's Austin studio, recording its 4th LP, "Celebrations". It is safe to say that this album will be the first real musical departure for the band, as there is little of the bombast and roar of previous albums, and more emphasis on melody, beats, and atmosphere. Inspired by the Bee Gees, Pete Wingfield, Kraftwerk, and Prince, to name a few, "Celebrations" will certainly be another exciting release from Golden Bear in fall 2013. The band looks forward to debuting much of their new material at SXSW 2013.