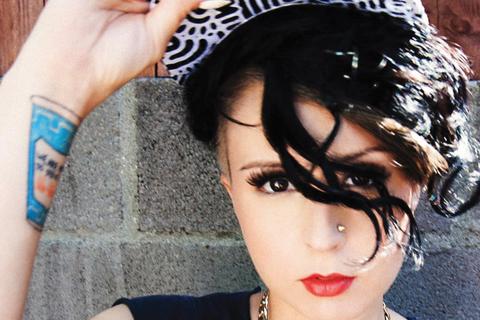 I started rapping “professionally” about 7 years ago, that included booking my own tours, sleeping on the floors of people I didn’t know, bathing in public restrooms, and accidentally kicking off a feminist revolution in Romania. I was taught how to rap by way of Project Blowed in South Central Los Angeles, it had a very “8 mile” vibe and when I got booed off stage I would come back next week a better rapper. They taught me how to paint my nails, rap with stage presence, and fight for the right to party. At the time I was in and out of homelessness which I pretended was camping, I stayed hungry in all senses of the word and somehow found my way. For the past few years I’ve somewhat transcended out of underground hip hop and now reside in musical purgatory, a place without genre where people try to label you themselves. I am in fact the “black guy” rapping on the Skrillex songs. Don’t mind the pale skin and breasts coming in short at 5’0 tall, I’ve somehow managed to stay true to my roots.
Now we pull up to what I’m currently doing, I released a mixtape called C.U.L.T. a few months back, it was about my life, peoples misconceptions, trying to box me in etc. We decided to rerealese it with two new songs on it, one’s called “Made It” that was basically a freestyle about where I grew up and how I’ve finally “arrived” the other song’s called “When I’m Gone”. I was really moved by my fans (Cult kids) and how they’ve held me down through this whole wave, so I wanted to make them their own song. People always say “I love my fans, they’re the reason I do this.” Hate to break it to you but they’re for sure lying, I love my fans but I do this because the alternative is a psych ward. The fact that I have fans is literally beyond my wildest dreams, I’m a kid who was never supposed to make it anywhere or do anything so I love the kids that feel the same and support me, we’re in this together till the wheels fall off. C.U.L.T. Too Young To Die.