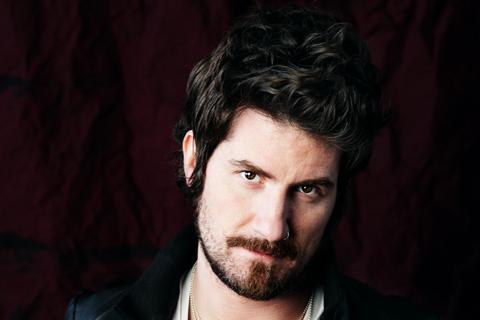 an album.
a collection of songs.
short stories. tied together.
peoples stories. about love.
about faith in others. or loss of faith in others.
everyone i know was going through personal relationship crisis.
divorce. affairs. being alone. being newly in love.
i was watching the people around me struggle and transition.
the songs are about them. about me.
the struggle to actually love
and find love.
and accept love when someone is actually giving it to you.

the title: opposing ideas banging against each other.
modern vs. love.
cold vs. hot.
hard vs soft
fabricated vs. organic.
angular vs. curvaceous!
how do they exist together.

records to me have always been uncomfortable to make.
they've always felt unnatural.
this one felt natural.
we hung the production on the beating heart. the song. the voice.
the production is loops... with real drummers, sometimes 2 or 3.
acoustic instruments against synths.
organic against synthetic.
the production is inspired by the futuristic throw of those 80s
records i love.
and how they made me feel.

tears for fears 'songs from the big chair'
depeche mode 'violator'
inxs 'kick'
echo and the bunnymen 'songs to learn and sing'
david bowie 'let's dance.'
where the kick drum sounded and promised an amazing future.
this was the idea for the production.
at the time those records didn't sound current.
they sounded like what was going to be.
it wasn't so much about copying the sonics of those records..
but trying to emulate the EFFECT those records had on me.
how they made me feel.
how they STILL make me feel.
classic songs. great singing. wrapped in the future.
a human heart beating inside technology. inside what would be cold
and empty without the soul.
but they work together.
towards something bigger, grander than the sum of the parts.

"kiss quick" informed the rest of the record.
it started one way. we beat the shit out of it. pushed it around.
re-recorded the drums. built a loop. re-recorded the guitars.
the keyboards.
it was the lynch pin.
it was the road map for the rest of the album.
we went back and re-recorded from there.
cut loose the things that didn't fit.
the idea was... future. where does love live in the future?
in a 'room at the end of the world?' at the 'bottom of the sea?'

fascinated with japan.
a place where modern architecture was smashed up against tradition.
against history.
bullet trains. everything moving fast
i read a ton of haruki murakami.
sexuality. and lust. against the cold backdrop of tradition
'room at the end of the world' came from this.

ended the "some mad hope" tour in australia.
same idea. same inspiration..
fascinated by the modern architecture there
and how it pushes right up against the outback.
cutting edge smashed against brutal, water starved, uninhabitable nature.
how these cutting edge, progressive cities sit on the rim of the totally untamed.
and keep expanding out into it.
the push of the city.
we move fast. we build things to move us faster.
where does the soul go in that?
"love comes tumbling down" came from that.

where does desire live? where does actual molten human emotion live in
a culture with facebook and twitter and light speed?
where do the molten parts of ourselves come out?
in art.
in music.
in the groove.
in the voice! the voice is the vehicle..
in the creative life. living creatively.
and using technology to your advantage.
as a platform for creative exploration.
not being scared. being excited.
"faster" came from this.

people misdirect their passion. their attention.
off themselves. onto celebrity.
every time i think it's bad, it gets worse.
the idea that someone else's life
is more fascinating than their own
we are being DEVOURED by this.
pulling away at the sand under our feet.
"modern love" came from this.
"mercy (less drowning, more land)" came from this.

i made so many records before. with a band. in a room.
this record started that way.
it started with that human element.
then the songs went into the lab.
into mark's garage in los angeles.
mark and i tinkering. pulling them apart.
swapping parts.
back and forth.
bringing in different people. different ingredients.
not settling.
making technology work for/with heart and soul and blood.

build the songs around static loops. layer drummers in.
don't play acoustic guitar.
write the songs without having played them first.
songs built around ideas. kick out the slats of the pen.
it's not about limits. it's about limitless.
we had SO MANY TALENTED PEOPLE at our disposal. use them. no rules.
build a rocket. see how far you get.
this was the first record that i started to let go of the fear.
the judgments.
and embrace the possibility.

this record feels like a beginning.
i had done the singer/songwriter thing. (8 albums of it!)
i didn't want to be defined by only that.
the success of 'some mad hope' was so validating.
being able to rub shoulders with my heroes.
to have that access.
to play bigger stages.
to hear my songs in arenas.
to befriend people who inspired me to reach further.
i am who i am waiting for.
i can be the person who makes the music that i want to hear.
that inspired me. I AM THEM.
"run," my collaboration with jennifer and kristian, came from this.

it's ok to show joy. it's ok to be sexy.
in the grooves. in the voice. in the riffs.
"queen of (k)nots." "mercy".. those are RIFFS!
i had never built songs around riffs before.
it was SO LIBERATING.
i embraced that the record needed to be bigger than me.
that i needed to let go. and let what was in me out.
i needed to dissolve into the fabric.
unapologetically embrace sexuality. sound.
inhabit the art.
it started really being about honesty.
in the DNA of the songs. in the singing.
be less concerned with what "they" think
and more focused on what I want.
finally.
- Matt Nathanson

About Matt Nathanson
Matt Nathanson is one of the most dynamic performers and premier songwriters on the music scene today. In 2007, his release Some Mad Hope produced the smash hit single ‘Come On Get Higher’ which has sold over 2 million copies to date and subsequent hit singles ‘Car Crash,’ ‘Falling Apart,’ and ‘All We Are.’ The success of Some Mad Hope earned Nathanson the coveted spot as a VH1 ‘You Oughta Know’ artist and he has graced the stages of such national television shows as David Letterman, Ellen, Conan O’Brien, Jimmy Kimmel, Craig Ferguson and the CMA Awards. His songs have been featured in numerous film and television programs including Good Morning America, NCIS, Private Practice, American Idol, X Factor, Vampire Diaries, American Pie and 90210. His legendary live shows have resulted in sold out tours across the U.S., Canada and Australia. Nathanson’s eighth studio recording, Modern Love, includes the hit single ‘Faster’ and the new single ‘Run’ – featuring Jennifer Nettles and Kristian Bush of Sugarland.

The show at Vice Bar on Friday, March 15