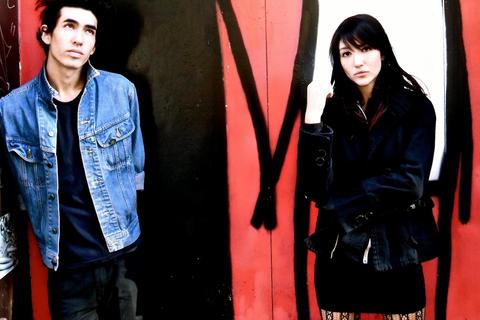 When you’re as naturally talented and driven as Carré Callaway is, it’s easy to get ahead of yourself. As a young girl growing up in Denver Colorado, it was always clear that she was going places, and getting there fast. Carré (pronounced “Car-ray”) taught herself to play guitar at the age of 13 and began performing in the local folk scene almost immediately afterwards. She had the kind of book smarts to gain so much extra credit at high school that she ended up graduating two years before everyone else her age did. And by the time she was 17, she was opening for Nine Inch Nails at their arena-sized shows for their 2005 With Teeth tour- at Trent Reznor’s personal behest. “When I told him I play music and he asked to hear some of it, I think it was a joke,” she remembers of the chance meeting at Reznor’s New Orleans studio that sparked his interest. “The songs I had written at the time weren’t the kind of thing you would expect he would be into. I think he expected me to suck and he’d get a laugh out of it. But he immediately said that I should record something.”

But the problem with being so precocious is that it can get you into trouble and while Reznor saw Carré had raw ability in abundance, it takes more than musical talent to survive the music business. “Trent really took me under his wing and taught me a lot but deep down, I didn’t even know what kind of music I wanted to do back then,” she remembers. “For a while, I was a part of that LA scene and people either just wanted to tell me how much I suck or what I should be doing. It was a rude awakening. I shut down for a while after that. I spent a couple of years in bed and stopped writing too. I was in the right place at the wrong time.”

It’s the sort of experience that would leave most aspiring artists defeated and desperate to return to a life of normality. But Carré has regrouped, refocused and realized who she wants to be when she performs- and that person is Queen Kwong. It might be a stage name but don’t be fooled into thinking it’s some kind of elaborate façade or a fictitious character. In person, she’s polite, pleasant and mild-mannered Carré Callaway but on stage, the wild, uncontrollable Queen Kwong emerges and those two contrasting sides of her personality have always been in place since she was young. “I was an angry, angry child,” she smiles. “I was out of control from a really young age. I used to have screaming fits that were so loud that the cops would have to come to my house. But there was also that part of me that was the shy, quiet kid who did well at school. Music was a way for both of those aspects of my personality to be reconciled.”

It’s a duality that you can instantly spot in Queen Kwong’s music. Her guitar isn’t merely an instrument she plays with her hands, it’s something she inhabits with her soul and the resulting shifts between beauty and brutality feel all the more intense because of it. Similarly, her voice has an elastic ability to go straight from a seductive purr to an enraged howl and it’s because she sings from the pit of her stomach rather than the back of her throat. What results is dangerously unpredictable blast of rock ‘n’ roll that sits in the lineage of such primal and visceral acts as The Stooges, Nirvana, early Hole, and even Queens Of The Stone Age. Of course, there are plenty of people who simply buy a couple of fuzz-pedals and use that as justification to name drop these acts as sonic influences, but Queen Kwong uses them as physical ones too. “I always associated with rock ‘n’ roll with not being square and wimpy but it seem like nobody wants to make noise or be loud or be aggressive right now,” continues Carré, as that angry side begins to gently simmer under her surface. “I’d rather sound like shit and put on a great show than sound perfect but wimpy. There needs to be something more in your face and more aggressive.”

It only takes a quick look and listen around to understand exactly what she means. Technology is a wonderful thing but it’s made it too easy to sound pristine- and rock ‘n’ roll is often at it’s best when it’s anything but. It’s a modern schism that Queen Kwong reacts to with her own recordings. Anyone expecting to be dazzled by flawless singing, technical wizardry and consummate production will be disappointed. Queen Kwong’s music is about power and volatility rather than panache and virtuosity and it’s exactly that which she is desperate to restore to the often-sterile world of modern guitar music. “I’m not sure when rock ‘n’ roll became this way, but it seems to me that everyone just wants to pussyfoot around when they play. I don’t want to go to a show and be yawning or listen to a record that fades into the background. I want to hear and see someone go at it, and really feel what they’re doing.”

Evidently, Carré’s period of convalescence has helped her redefine her musical goals but just as important is the manner in which she is going to achieve them, and it’s certainly not going to be via the fast-track. “When I was playing arenas with Nine Inch Nails, I was in a position that most bands never even get close to and it was an experience that probably helped shape what I am today,” she admits. “But I never really wanted to do that kind of thing. It was something that I was thrown into. Playing clubs and small venues is all I ever wanted. It’s fitting to who I am and the kind of music I want to make.” Having done a few soul-destroying laps around the music business matrix already, Queen Kwong is ready to forge her own autonomous path that goes from town-to-town and venue-to-venue. It’s the long way around to be sure but in the end, Queen Kwong is destined to finally end up in the right place, at the right time.