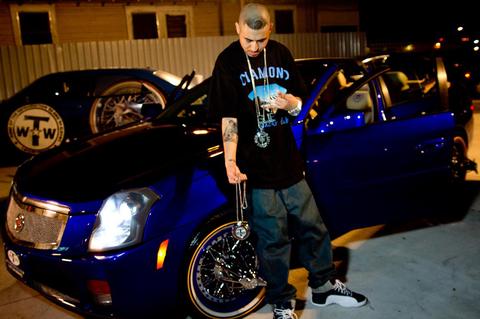 Dat Boi T, Born & Raised In Houston, Texas In The Neighborhood Of Second Ward. The 28 Year Old Hispanic Rap Artist is affiliated with the Legendary Screwed Up Click Founded By The Late Great DJ Screw (RIP). He is known as the Official "Screwed Up Essay" and has formed a Latino camp called the "S.U.E. or the Screwed Up Essays" His Mixtapes Consist Of The “What’s Really Good!” Series. His 1st Studio Album, “Life In Da Slow Lane” Was Released January 1, 2009 Including Production By Cy Fyre. The Single “Bangin Wit My Bubb Lightz” Featuring DJ Screw’s Brother, Al-D, Has Been Featured On Numerous Mixtapes, Not Including His Personal Library of 20 Full Length CD's. Dat Boi T has also collaborated with Houston Artist Lucky Luciano and produced projects "Thoed Essays" Mixed By DJ Eddie Deville & "Thoed Essays 2" Mixed By DJ Buddha of StickyGreen Productions. He and Lucky also came together to produce the "Houston Latin Mic Pass" Music Video which became an instant HIT and received HUNDREDS of THOUSANDS of views setting off a trend of "Mic Pass" style videos from numerous other cities NATIONWIDE. He also has a many other SOLO Music Videos on YouTube with HUNDREDS of THOUSANDS of hits and his YouTube channel is over 2.5 Million views. Dat Boi T is quickly gaining a huge buzz NATION AND WORLDWIDE. He is also a 3 time Houston Press Music Award Nominee. He has his own clothing line and is an entrepreneur in every aspect of the game. His Official Website is http://www.ScrewedUpEssay.com or just "GOOGLE" his name and you will see for yourself his IMPRINT in the Rap Game and How He Is Now One Of The Biggest Latin Artist In The State Of Texas.