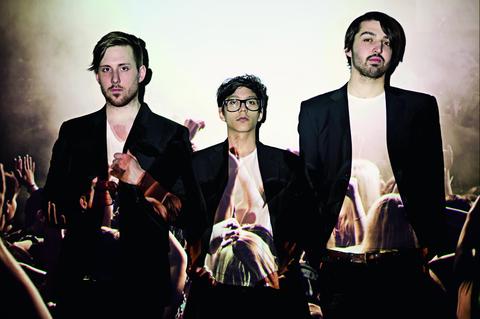 FUCK ART, LET’S DANCE! are quite simply white boys providing the very best fidgety tunes. Romeo Sfendules (Guitar) and Tim Hansen (Drums) operate as a highly motviated and brilliant team behind the dynamic, inspired and ridiculously young and talented singer Nico.
FUCK ART, LET’S DANCE! manage to create a make believe utopia and their intense electonic beats drive the atmospheric guitars directly into the open hearts of their dancing fans. „Tous pour un, un pour tous“(All for one and one for all), ecstasy and neon lights have won over MTV, NME and Audiolith with Jamie Hodgson (NME) citing that the Hamburg lads play ‘Jerky 2-bit dance pop for indie geeks with colourful knit-wear!‘ They were as brilliant as the support act for Who Made Who, We Have Band or Ratatat as they are on the xxx remix for the band Saalschutz and on King Kong Kicks Vol. 3 ‘Encore.‘ After 3 years together they were launching their first single ‘The Conqueror‘ on Audiolith International and with it follow in the footsteps of Heaven 17, Whitest Boy Alive and Bloc Party on the path up to the top of Mount Olympus.
After playing more than 80 shows in Germany, Austria, Switzerland, Luxemburg and Spain in 2012 FUCK ART, LET’S DANCE! are set to release their official debut in Spring 2013.