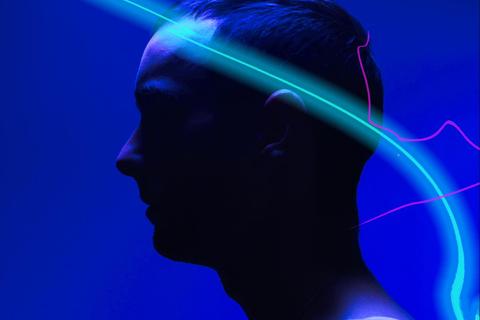 Listen to huggin' and kissi

Jonathan Bates isn’t one for straight lines. The conversation about his band—one-man outfit Big Black Delta—is filled with twists and turns, punctuated with talk of cats (he owns two), aliens (firm believer), and Internet memes (to be enjoyed all the time, if possible). It’s an apt metaphor for Bates’ musical inclinations.
Straddling genre lines, Big Black Delta’s debut full-length is a darkly romantic collection of songs, tied together with a through-line of ear-shattering electronics and roaring walls of drums and guitar. “Suit and Tie” features Bates’ modulated creepy/soul vocals over a crunchy, dark disco stomp, whilst on “Huggin & Kissin”, Bates takes the listener on a journey from lust to love and back again, a twisted love song wrapped in an all-or-nothing percussive wave. A slinky after-hours burner, “Into the Night” sees Bates tapping into his inner romantic, luxuriating in a sea of bells, synths and bass. From the frenetic sonic attack of “Ifuckingloveyou,” to the heartfelt duet “Dreary Moon” (featuring M83’s Morgan Kibby), to the ambient soundscape of “PB3,” it’s a difficult beast to name—let alone fully grasp
Of course, to hear Bates tell it, fulfilling expectations is the least of his concerns. “What’s the biggest gift that you can ever have?” he muses over a cup of tea at his apartment in the Echo Park neighborhood of Los Angeles. “If you truly didn’t give a shit about what anyone thought of you. Don’t lose empathy, don’t lose sympathy. Just artistically don’t worry about anything.”
It’s a battle cry that has guided him through his career. Formerly the frontman of genre-gobbling trio Mellowdrone, Bates found himself without a band after nearly decade of hitting the tour circuit, or as Bates terms it “rolling a boulder up a hill.” Burnt out, he began to wonder if he could find artistic fulfillment with a band.
After stints as a deliveryman, gear-teching, and as a touring musician with M83, Bates was guided back into making music by his friend, former Nine Inch Nails member Alessandro Cortini, who encouraged him to try his hand at crafting tunes on a laptop. The result was nothing less than a man-vs.-the-machine love affair.
“I was in a dead-end relationship at the time, and I was like ‘cool, I have something to do,’” he laughs. “It was better than going out and getting into trouble. I’d rather do that than spend money nefarious things.”
Slowly, a project began to take shape. Encouraged by Cortini’s advice—that the worst that could happen is no one would care—Bates christened his project Big Black Delta after the official name for a type of man-made UFO. “What are my favourite things?” he asks paraphrasing a recent video meme. “‘Netflix and birds!’ If you’re going to make music and it’s going to be in a bubble, what is your favourite shit? Big Black Deltas!”
As if to drive home his no-holds-barred creative pursuit, the live setup includes Bates on vocals, alongside duelling drummers and an elaborate rig of strobe lights. The spectacle allows the otherwise soft-spoken musician a chance to tap into his uninhibited side, prancing like a latter-day David Bowie. Or, as Bates describes it, dancing and vacuuming at home while serenading his cats. “That’s why I flail around,” he says. “Because that’s the only time you’re allowed to do that!”
Happy to be a solo artist, Bates sees Big Black Delta as a flexible entity—able to expand in any direction his muse leads him. He excitedly describes a track off the forthcoming album, evoking the likes Pantera, Will Ferrell, and zombies. If it sounds heavy—or a bit of absurd—well, that’s exactly what he’s is going for. “That’s why I love this project, because I can write any song I want to,” he says. “How can you take me seriously? I don’t care if you don’t….the record is me.”