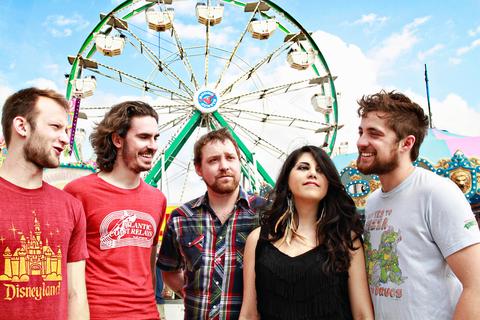 Listen to Marry The Sea

It was Marti Sarbit’s voice that immediately captured multi-instrumentalist and songwriter Rusty Matyas’s attention at the Cavern, a Winnipeg bar where Sarbit was fronting a Motown cover band and Matyas had come to mix the sound. Matyas, a major label veteran via his band The Waking Eyes and a touring member of Canadian indie rock stalwarts The Weakerthans, knew he wanted to write something for -- or with -- this innately gifted young singer if only to commit her voice to tape and hear what the results might be. The instantly compelling “Say You” was the song they soon whipped up, and one quick listen to what is now Imaginary Cities’ dramatic album opener clearly demonstrates what caught Matyas’s ear – and what subsequently propelled the duo to the top of Canada’s college charts and year-end best-of lists.

Though Canadian critics often emphasis the soul-music aspect of the duo, Imaginary Cities utilizes a mixture of musical flavors for a more expansive, often stirring, pop-rock palate, as in the albums’ title track “Temporary Resident”, or others such as “Don’t Cry,” or “Hummingbird”. They also take an amusing left turn with “Manitoba Bossa Nova,” which sounds just like the title suggests.

Throughout 2011, Imaginary Cities’ debut has gradually been released in various territories outside of Canada, including Europe and Australia, where they toured last year, backed by a band they’d assembled with other Winnipeg-based musician friends. Their reputation grew quickly, appearing in the North by Northeast music festival, winning a Western Canada Music Award for best pop album of the year and were long-listed for the Polaris Prize. They have snagged opening spots with groups like Ra Ra Riot and Besnard Lakes. Most impressively they were invited to join the Pixies on the entire run of their North American tour last year.

In a little over a year, Rusty and Marti have evolved from strangers, to a pair of musical allies tinkering in the studio to part of a permanent five-piece band preparing for the U.S release of Temporary resident and subsequent tour dates. Imaginary Cities is proof that sometimes the best creative partnerships are simply destined to be.

The show at Friends on Thursday, March 14

9:00PM The Harpoonist and The Axe Murderer